“Many could have been tortured to death,” charges lawyer for jailed Maruti Suzuki India workers

In a telephone interview with the World Socialist Web Site, one of the lawyers representing the 149 jailed Maruti Suzuki India (MSI) workers described how many of them have been brutally tortured by police. 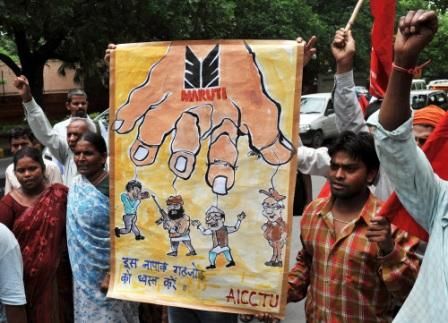 Rajendra Pathak said police had beaten the workers and subjected them to various forms of torture including electric shocks, submersion in water, and severe leg-stretching. “Many,” said Pathak, “would have been killed by the police, if not for the media publicity about their arrest and our legal intervention.”

Last year, workers at MSI’s car assembly plant in Manesar, an industrial center in the northern state of Haryana, rebelled against a company stooge-union, mounting a series of militant strikes and plant occupations. Determined to maintain a brutal work-regime that has made huge profits for MSI, the company and Congress Party-led state government have resisted recognizing the independent Maruti Suzuki Workers Union (MSWU).

Working in tandem, the government and company seized on a management-provoked altercation on July 18 that resulted in the death of a manager to frame up the leadership of the MSWU and more than 125 other workers on serious criminal charges.

Many of the arrested were not even at the plant at the time of the altercation. But they were rounded up because MSI management had given their names to the police.

India’s largest automaker, MSI has also carried out, again with the full support of the state government, a purge of its workforce. In September, 546 permanent workers and 2,000 contract and temporary workers were dismissed from their jobs at the Manesar assembly plant.

Defence Attorney Rajendra Pathak spoke with the WSWS about the corporate-government vendetta against the Manesar MSI workers.

WSWS: Can you describe what you have learnt from your discussions with workers about the torture they were subjected to?

Pathak: I visit them in jail frequently. All of the 149 workers were beaten by the police. Thirteen of them—including 12 union leaders and a worker who was suspended on July 18 for allegedly slapping a supervisor who had made a denigrating caste remark against him—were singled out for severe cruel punishment.

Many would have been killed by the police, if not for the media publicity about their arrest and our legal intervention.

The chief officer of the Criminal Investigation Agency was himself involved in this torture. He was giving electric shock to these workers by putting an electrically charged instrument on their bodies.

The workers hands were tied at the backside and they were hung in a hook upside down.

Before they were subjected to torture they were stripped naked in front of others including [an MSI executive].

The police have a 90kg roller that they would roll on the back of workers after the workers were made to lie on the floor. Before they started this type of torture, they would wrap the bodies of workers with a cloth to cover up the visibility of injuries.

WSWS: When and how did the workers get in touch with you?

Pathak: The MSWU leaders called me on the afternoon of July 31 and said they were coming to see me at my office.

Somehow police got this information and the MSWU leaders were stopped on their way and arrested and taken to the police station. In the night they were beaten up. They were not produced in the courts and kept in illegal custody for one day. Only on the 2nd of August, which is a holiday in Haryana, Raksha Bandhan, were they produced in the courts, but the police showed them as having been arrested on the 1st.

In the D.K. Basu case, Supreme Court Judge Anand laid down important safeguards against custodial torture. Based on this, I moved the application [for medical examination], but the judge on duty was not convinced. He simply issued notice to the police. There is no need of issuing notice to the police. Because they are all aware of all the procedures; all are party to Judge Anand’s judgment.

Police fought for remand of 14 days of those arrested union leaders, but I objected, and as a result they were granted 8 days remand. During this time they were subjected to cruel torture in police custody in Gurgaon, Haryana. After keeping them in police remand for 8 days, the MSWU leaders were again produced in the courts. Subsequently they were sent to judicial custody.

Pathak: I moved for medical examination of the arrested workers which is mandatory. But I have learned the police threatened the doctors, telling them that as government employees they should fall in line with the police reports and shouldn’t be generous towards the Maruti workers. They demanded the doctors simply give medical reports as per police direction and fake reports were produced.

However as I moved the courts for medical examination, it was conducted on September 21 under the supervision of the Gurgaon medical officer and in the presence of several advocates for the jailed workers. The medical report revealed five workers were seriously injured.

WSWS: How many workers have been given charge sheets?

Pathak: All 149 jailed workers have been given charge sheets, each of which contains 400 pages. Of the 149, only 44 are named in the FIR (First Information Report). Twelve union leaders and another worker are charged with the murder of the MSI manager.

93 of the charged workers were not involved in any action on July 18 (the day of the altercation).

There are 182 witnesses mentioned in the charge sheets. These include 30 doctors, 70 or 80 policemen and 70 or 80 MSI management officials.

In total police have named 215 workers in the murder case and out of them 66 are yet to be arrested. Out of the 66 only 9 are named in the FIR.

WSWS: What are the legal arguments you intend to make in defence of the jailed workers?

Pathak: We are planning to file a contempt of court case in the High Court against the police for not complying with Supreme Court directions in relation to medical examination.

It will take some time. Only by January do we expect to be able to bail out most of the jailed workers. As per the charges leveled against them, they could face jail terms of 20 years. If our bail applications for all 149 are not granted in Gurgaon District Court then we will go to the High court. We believe 110 out of 149 could be bailed out. For the remaining 39 it may take a longer time.

When I asked the workers, they said they never hit the manager who was killed in the July 18 incident. In fact as this manager was sympathetic to the plight of MSI workers, there is no reason why would they go for him.

The terminated workers of the Manesar plant of Maruti Suzuki organised a convention at Ambedkar Bhavan here on Sunday to demand their reinstatement and withdrawal of “false” cases against their jailed colleagues and leaders of the Maruti Suzuki Workers Union (MSWU). After the July 18 violence at the Manesar plant in which one senior executive was killed, the company had fired 546 “permanent” and 1,800 “temporary” workers. The police arrested 149 of them, including the MSWU office-bearers, for alleged involvement in the violence.

The protesting workers alleged that an all-out war has been waged against them by the Maruti Suzuki management in nexus with the Haryana Government because they expressed their right to form workers’ union and questioned the “illegal” practice of contract worker system. “We have got enough evidence which proves that the violence of July 18 was orchestrated by the Maruti management with a single-minded aim to crackdown on the union workers,” said a worker on condition of anonymity.

With their leaders behind bars, the workers have formed a seven-member provisional committee to continue demanding their rights. “We want our reinstatement and a proper and unbiased CBI inquiry into the incident apart from the release of all our colleagues who have been arrested,” said one of the members of the provisional committee of MSWU.

The last seven months since the MSWU leaders are in jail and 546 workers out of job facing acute financial condition, the Maruti Management was trying hard to break the workers’ morale and courage to continue their struggle, charged New Trade Union Initiative (NTUI) leader Rakhi Sehgal.

The workers argue that at least 100 to 125 out of the 149 arrested workers who were not there at the spot when the violence happened have been denied bail in spite of the fact that they were slapped with bailable charges. This was because the administration was using them to break the unity of the MSWU, they alleged.

“The jailed MSWU leaders are being told by the administration that if they take the charges of attempt to murder upon themselves, the innocent ones would be allowed to go. This proposal has been categorically rejected because all the arrested workers are innocent,” she added.

The administration is using a double strategy of harassing the workers inside the jail along with not giving these terminated workers their due so that they do not dare form any workers union in future. For instance they allege in continuance with the harassment of the workers, the management and the Haryana Government have not fulfilled the promises.

“We were told that the exploitative contract system will be phased out, which has been our long-standing demand, and test and interviews will be organised to recruit workers for permanent jobs, promises on which they are maintaining a complete silence,” said a worker present at the convention.

One member of the provisional committee said the workers want to return to a healthy working atmosphere to the company through negotiation and dialogue, but on respectable and dignified terms and not on the conditions of “slavery” that were being imposed on them.

One big question posed by the workers was why they were not being reinstated in spite of being acquitted of any involvement in the violence by the Government constituted Special Investigation Team.

Highlighting the “loopholes” in the prosecution case, Ms. Sehgal said the charge-sheet field by the prosecution was not complete because neither the list of witnesses nor proper documents in support of their charges have been filed. “How is the defence supposed to proceed in the absence of these two vital things?” asked Ms. Sehgal.

Ashim Roy from the NTUI referred to the larger picture saying the “corporate controlled” Government did not want the workers to keep fighting for their rights and wanted to write off the possibility of the workers union in the auto industry for which India will be seen be a hub.

The workers organised a rally from Paharganj to Jantar Mantar where they submitted a memorandum to the Prime Minister with their demands which included abolishing the illegal contract worker system by the year 2013 especially in the context of the permanent nature of work in the auto sector in Gurgaon-Manesar-Dharuhera-Bawal-Faridabad-Noida-Ghaziabad industrial region.

MSWU has also demanded that workers union must be formed in the auto belt industrial region. Within 45 days of application for registration of a trade union, the labour department concerned must ensure the registration of the trade union with due process, said one of the MSWU leader adding “all permanent workers in the auto sector must be given minimum wage of Rs.25,000. Till they are not made permanent, all workers in the auto sector in this region should be given minimum wage of Rs.15,000”.