MOSCOW — When secretaries, financial analysts and the like spilled onto the streets of Moscow in antigovernment protests last winter, Vladimir V. Putin took one look and dismissed them as a crowd of “office plankton.” 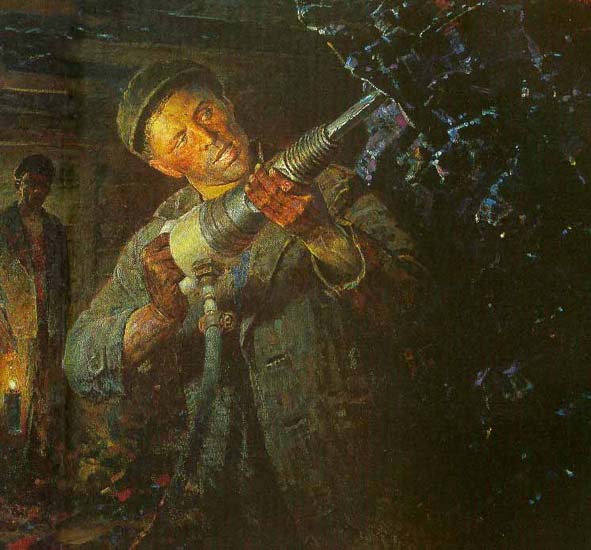 And then he set about burnishing his credentials as a champion of real, working-class Russians, a project that continued on Monday with his decision to dust off a relic of Soviet heraldry: the set of lapel pins called the Hero of Socialist Labor award, now conspicuously shortened in these capitalistic times to the Hero of Labor.

Mr. Putin, who was elected this year to his third term as president, has brought back the Soviet anthem, military parades and political repression. But until now he had not set about restoring the grandeur of the Soviet lapel pin collection for civilians — awards marked by the heads of Lenin and ribbons that once caused jackets to sag.

“Of course, I think that it would be good for us to revive the Hero of Labor award, only we need to think — we shouldn’t make a complete copy of it from the Soviet times,” Mr. Putin told a meeting of political supporters, the Interfax news agency reported Monday. “We need to be sure it covers working people, no matter where they work, and those who work with their heads and their hands.”

Mr. Putin is believed to be swiveling to the political left through the embrace of movements like Mr. Kholmanskikh’s. The intention is to co-opt expected discontent in industrial regions, where support is still stronger than in the urban centers, in case the price of oil, the mainstay of the Russian economy, declines in coming years.

As wages level off, medals and awards that raise status without costing hard currency might substitute as compensation, as practiced in the Soviet period, beginning principally in the 1930s, when such status symbols, rather than salaries, measured accomplishment.

By the 1980s, medal inflation had rendered such awards all but meaningless, as nearly everybody had some, and they became the objects of near universal derision — eventually sold by the hundreds in canning jars on the sidewalks of East bloc countries.

The Hero of Socialist Labor award was created in 1938. It went to coal miners, milkmaids, tractor drivers and others who applied more than the typical amount of elbow grease to their work, thus contributing to “the growth of the might and glory of the U.S.S.R.,” according to an entry about the award in the Big Soviet Encyclopedia.

The award came in the form of two pins — a ribbon and a medal with a cameo of Lenin.

A revision of the rules in 1949 clarified that workers who received the award three times would also have a bronze bust made in their likeness, along with the six pieces of chest decoration. Mr. Putin did not say whether the new award would lead to any busts for repeat winners.

Other awards went to so-called shock workers who took on difficult jobs. Mothers who had 10 children or more were called Hero Mothers.

But in the late 1980s, after the devaluation of lapel pins under Leonid Brezhnev, the government scaled back to ban multiple awards to the same person, then abolished the Hero of Socialist Labor award altogether with the Soviet Union’s demise.