The unprecedented wave of strikes by Western Cape farm workers has sparked alarm in the province’s business and political establishment.

Premier Helen Zille and her party believe the strikes are « political », by which they mean an organised campaign by the African National Congress (ANC) and the Congress of South African Trade Unions (Cosatu) to undermine the Democratic Alliance (DA) and reclaim the government of the province.

Cosatu denies this, saying that the strikes are the initiative of workers and they are following behind, trying to maintain discipline and provide leadership. 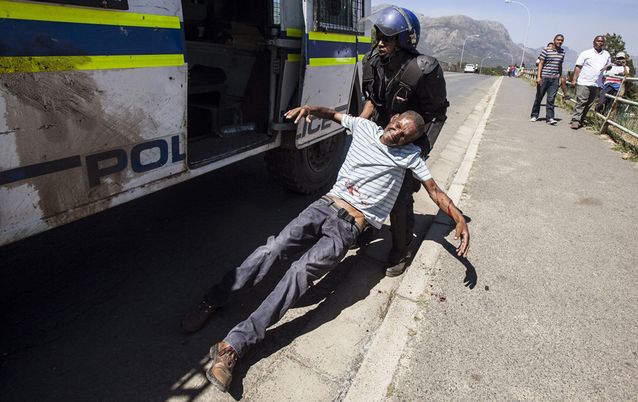 CASUALTY: A injured protester is loaded into a riot vehicle after police dispersed a violent protest by farm workers in Wolseley on Wednesday.

So are the strikes political ?

Without doubt, they certainly are. It is a political issue that farm workers earn a minimum wage of R70 a day, which every striker will tell you has become very difficult to live on. Minimum wages — set by the Employment Conditions Commission and then gazetted by the minister of labour — have risen more or less in line with inflation since they first became law under the Basic Conditions of Employment Act in 1997. But the reality is that food prices have risen much faster.

The staple food of farm workers in De Doorns, cultural origins aside, is mealie meal, which between January 2011 and January this year rose between 41.3% and 63.9%, depending on the quality.

The University of SA’s Bureau for Market Research has shown that for other basics — sugar, oil and cereals — inflation exceeded 10%. Yet headline inflation, which provides the measure on whose basis wage determinations are made, was 6.3% for the same period.

There is no denying that intimidation and violence are prominent in the farm strikes, as they are in every industrial dispute in SA. A worker survey Cosatu conducted earlier this year revealed that 50% of workers believed violence to be necessary and justifiable in a strike. Farms and mines, where work and living arrangements overlap and policing is difficult, are more prone to violence than other workplaces.

But the idea that the strikes are political because they have been instigated for political gain is a case of political paranoia.

When De Doorns workers first went out last Monday, it took nongovernmental organisations (NGOs) that are in regular contact with farm workers several days to establish the origins of the action. An activist in Boland, Trevor Christians of the Commercial Stevedoring Agricultural and Allied Workers Union, says that « workers went in front ». Colette Solomon of Stellenbosch project Women on Farms says « it took days to find any leaders » who could speak up for the workers. 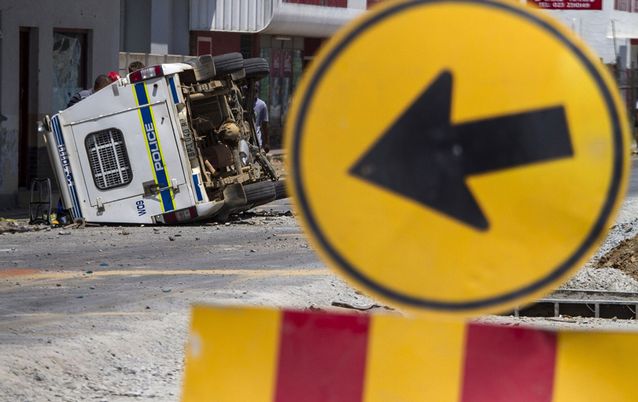 AFTERMATH: A police van lies destroyed in the main street of Wolseley, near Ceres, on Wednesday after protesting farm workers went on the rampage.

Countless farm workers interviewed by journalists have told the same story: with our wages, we cannot buy anything, including food.

Having learned from the mistakes of Marikana in which the National Union of Mineworkers found itself shut out of the strike, Cosatu’s Western Cape provincial secretary, Tony Ehrenreich, has shown more political savvy. Instead of staying outside the dispute, Cosatu has, along with a disparate alliance of independent trade unions and NGOs, provided leadership. De Doorns workers, most of whom are not members of unions, have accepted this leadership.

Mr Ehrenreich has made the opportunistic political points about the DA that are to be expected. It was to be expected as he is a leading and outspoken politician in the province, and a leader of the ANC opposition in the City of Cape Town, where he is a councillor. 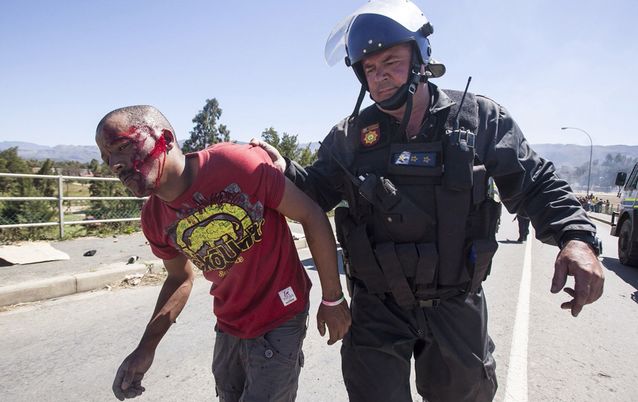 BLOODY CLASH: An injured protester is taken away by police after protesting farm workers were dispersed in Wolseley, near Ceres, on Wednesday.

While Mr Ehrenreich’s role does little to calm tempers or settle the dispute, the context in which he is acting is that of a trade unionist driving a hard bargain, which he has done with remarkable success so far. Agriculture Minister Tina Joemat-Pettersson’s opportunism in blaming the DA has been less palatable. Addressing De Doorns workers on Tuesday, Ms Joemat-Pettersson jumped on the revolutionary bandwagon. Shouting slogans and toyi-toying, she told workers that they had « won » their strike and that she would personally enlist the support of the country’s president (not the Employment Conditions Commission) to raise the minimum wage.

In disregard of legal process, Ms Joemat-Pettersson said she would tell the National Prosecuting Authority and the minister of police to withdraw all charges of public violence and intimidation against farm workers. But most alarming of all was her political dishonesty.

Conveniently ignoring the fact that it was the ANC government that gazetted the R70 a day minimum wage, Ms Joemat-Pettersson told workers that low wages were the fault of the DA, which was « building an apartheid colony » in the Western Cape. Remarkably, political flags and T-shirts were absent among striking workers. Workers carried branches of trees and makeshift flags made from plastic bags.

The emblems of both the ANC and DA were noticeably absent.