Dhaka, Oct 23 (bdnews24.com) – A violent clash broke out on Tuesday after the law-enforcers tried to remove workers of the controversial Hall-Mark group, who blocked the Dhaka-Aricha highway to press for disbursement of current month’s salary, Eid bonus and overtime allowances.

The violence lasted from 11am for half-an-hour as the police pushed back around 5-6 thousands workers, who sieged the major road in Jorpul area, allowing resumption of traffic that had backlogged for their demo, causing massive suffering for holidaymakers heading home for the Puja and Eid vacations. 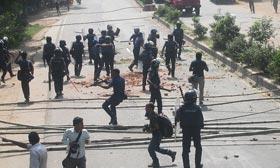 « At one stage, the workers started pelting brickbats at the police and we retaliated by firing rubber bullets and teargas shells to bring them under control. »

After nearly two weeks of agitation, the workers of the garments factory, which employs over 30,000, were paid their wages due for September on Sunday and Monday.

Related persons said that the workers would be given only their due wage for the month and that they would not be getting their Eid bonus or overtime allowances just yet.

Salary of the other staff of the Hallmark factories would be cleared gradually, officials concerned said.

The Anti-Corruption Commission also filed cases against seven other top officials of the Group over the scam.

The workers have been facing uncertainty since the arrest of the top brass as they are not being paid their dues.

After a number of days of demonstration in Savar’s industrial area, hundreds of workers formed a human chain in front of the National Press Club in Dhaka seeking the Prime Minister’s intervention regarding clearance of their dues.

This entry was posted in Radicalisation des luttes ouvrières and tagged Bangladesh. Bookmark the permalink.