Only a few are at work at a factory of controversial Hall-Mark Group in Savar on the outskirts of the capital while workers, inset, take a nap on the empty floor of another nearby factory of the group having no work.

Police said the controversial business group came up with the decision as the factories do not have any work orders right now and more than 35,000 workers have been demonstrating for their due payments.

Talking to The Daily Star, Md Moniruzzaman, a deputy director of Industrial Police, said the group’s around 60 factories in Savar were closed.

A government appointed committee headed by a joint secretary for running the apparel units of the group said the workers will be paid their due salaries by next Thursday.

The government has appointed the committee following the arrest of Hall-Mark Group Managing Director Tanvir Mahmud and its General Manager Tushar Ahmed in connection with Sonali Bank loan scam.

Earlier on Sunday, at least 50 people were injured as the workers clashed with the police demanding their due salaries.

The injured were admitted to local hospitals while the Hall-Mark authorities shut the factories for the day.

The agitators said the authorities did not fulfill their commitment to pay the two month’s due salary of the employees on October 7.

They said their landlords were asking them to leave while shopkeepers were not selling anything on credit.

The Hall-Mark bosses were arrested on a request from Anti-Corruption Commission, which filed 11 cases with Ramna Police Station on October 4 against 27 officials of Hall-Mark and state-owned Sonali Bank for misappropriating Tk 1,568 crore.

The Hall-Mark Group on Monday shut down its factories in Hemayetpur of Savar for three days in the wake of workers’ protests demanding arrears.

The authorities of the Group were forced to announce closure of the factory in Nandakhali to prevent the protests from turning violent, said Industrial Police’s Inspector Abdul Baten.

He said authorities had assured the arrears would be paid once the factories reopened on Thursday.

« But there is a dairy farm inside the Hall-Mark compound, and a lot of cows are there. The arrears can be paid by selling those. The police are discussing the possibility with senior officials of the Group, » he said.

According to sources, the Hall-Mark Group workers had not been paid for the last one month as the group suffered a setback following the top brass’ arrest over their alleged role in a loan scam.

Last Sunday, workers clashed with the police over the same demand.

At least 50 people were injured when police fought running battles with the workers of Hallmark Group of factories at Hemayetpur in Savar on Sunday. 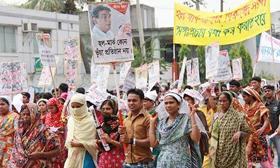 The workers of the group, who have been demonstrating demanding payment for their work in September, resumed demonstration at around 10am.

At one stage, they had a heated argument with the police deployed outside the factory.

Police obstructed them when thousands of workers took out a procession and headed to block Dhaka-Aricha highway.

The law enforcers had to charge baton and fire tear gas shells to disperse them when they started to hurl brickbats on them, Savar Industrial Police Inspector Abdul Baten told bdnews24.com.

The demonstrators said at least 50 of them were injured during the running battles they fought with the police.

They took position in alleys in the area. A large number of police were seen deployed on the Hemayetpur-Singair road and in front of the Hallmark factories.

The Hallmark workers are yet to get the payment for their work in September reportedly for the arrest of the company’s Managing Director Tanvir Mahmud and General Manager Tushar Ahmed in cases over loans taken from the Sonali Bank breaching rules, possession of illegal arms and masterminding an attack on Rapid Action Battalion (RAB) personnel.

Police had forced around 30,000 Hallmark workers out of the factories when they had started demonstration over the demand on Thursday.

The law enforcers had spoken with the factory authorities over the issue afterwards.

The demonstrators alleged on Sunday that no step was taken though the authorities on Thursday assured to pay the dues.