CAIRO — It was the kind of game that used to lock Egyptians in 90 minutes of suspense. Cairo’s Zamalek team was up against Suez’s PetroJet. Zamalek’s Ahmed Gaafar scored the last of three goals in that shutout game, after the ball bounced off PetroJet’s goalie. Gaafar kissed the ground as the television announcer roared a loud “Goal!”

The stadium, however, was silent. There were no fans to see the game. 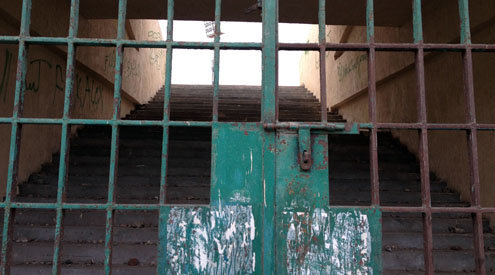 A gate at the Port Said soccer stadium where 74 people died in a notorious melee Feb. 1, 2012, was still welded shut in this photo taken in January 2013.

Ever since 74 fans died last year in a stampede after a match between rivals al Ahly of Cairo and Port Said’s al Masry, the government has prohibited fans from attending the games. Concerned that Egypt’s badly demoralized and fractured police were unable to secure the games, matches now take place in stadiums secured and owned by the country’s military.

The change is one of the many new forms of normal emerging here – and shows how the inability of the government to guarantee the safety and security of its citizens has affected life here.

Just as women can no longer safely attend demonstrations in Cairo’s Tahrir Square for fear of sexual assault, soccer fans can no longer attend their beloved games for fear of organized mayhem. Instead, they must watch the matches on TV, staring from the sidewalk at a set in a cafe or, for wealthier Egyptians, alone or with friends in their living rooms.

Last month, a judge in Port Said sentenced 19 al Masry fans to death for their role in last year’s stampede, a verdict that set off violent protests that have killed at least 55 and continue to this day; five more people died in violence this week in Port Said.

And police are bracing for another round of demonstrations on Saturday, when the court is scheduled to issue verdicts against 54 other defendants in the stampede, this time including police officers and al Masry club officials accused of negligence in the case. Al Ahly fans already have attacked the Ministry of Interior in Cairo in what many believe was a warning of what they will do if the verdicts are too easy on the defendants.

In the meantime, the game already has changed.

Before the 2011 uprising that toppled President Hosni Mubarak, soccer dominated debate in a nation where the political landscape seemed static and fears of arrest were real for those who those who spoke out against the government.

Fans were so animated about games that one could follow a match from afar just by listening for the noise of the crowd. A roar would erupt with every goal; a groan for every missed opportunity. Afterward, fans would take to the streets.

These days, soccer has been pushed out as a national priority by the daily barrage of protests, economic turmoil and persistent instability. In the absence of fans, the games, broadcast on national television with the empty seats in the background, look more like scrimmages or intense practices.

“People are less interested in soccer by 50 percent because, for example, al Ahly is having a match while there is a protest going on in Port Said,” said Atef Shady, 29, who’s been a sports reporter for al Watan newspaper since 2005. “It even changes how I write about the game.”

Soccer entered political discourse during the 2011 uprising. Organized fans, known as “ultras” here, galvanized their soccer clubs’ supporters to flock to Tahrir Square by the thousands, contributing to Mubarak’s fall. In one infamous incident, soccer fans stormed and sacked the Israeli Embassy shortly after the country’s military assumed power. A soccer club’s supporters can singlehandedly change the tenor of a protest, taking it from moribund to impossible to ignore. When al Ahly supporters urged the prosecutor to charge al Masry fans, administrators and police in the stampede, soccer went from a distraction to the impetus behind major protests.

Even the players are distracted. Hamada Tolba, 29, is a Zamalek defensive player from Port Said who stopped going to practice to take part in protests that broke out in January. He was pushed to second string because of it – and is working to get back on the field.

The fans want to discuss politics, not the game, he said.

“People used to be waiting for us to talk about how we play. I liked when people critiqued our play. Now when I talk to anyone from Port Said, they say, ‘Our city is on fire. Your friend is dead,’” Tolba said.

The players have had to learn how to adjust to playing with crowds, on those occasions when they travel outside Egypt to play other African nations’ teams, and to playing without, ironically, when they are on their home turf. Some do better without the pressure of the crowd. Most do not.

“There is no actor who goes on stage without an audience,” said Ahmed Hassan, 37, a 20-year veteran of the game now playing as a midfielder for Zamalek. “The fans awake a nerve of the soccer game, but I support having no fans during this period.”

Only members of a team’s board of directors – no more than two dozen people – can attend the games. On television screens, these pitifully few spectators cannot be seen, just the rows and rows of empty seats.

Khalid Darandey, a member of al Ahly’s board, calls the experience surreal. The silence is such that he can hear the sounds that generally are lost in the roar of the crowd: players talking to one another, the gentle tap of feet sending the ball skittering across the grass, the punch of a shot on goal, the coach’s yells as he berates a player or celebrates a score.

When a member of the al Ahly team scores, Darandey claps politely, all too aware of the missing fans and the lost ticket revenue, merchandise sales and national fervor.

“It is a challenge to manage a club in a situation like this,” Darandey said.

Games, of course, always have stirred emotions. But after the 2011 uprising, security worsened in the country’s stadiums. More fireworks, knives and other weapons began making their way into stadiums, and fans were able to intermingle after the games in a way that the Mubarak-era police had never allowed.

Still, no one foresaw the unprecedented violence that took place after the al Ahly-al Masry match last year. The government was so amazed that it canceled what remained of the season and imposed the no-spectator regimen when the new season began.

Tolba fears that Saturday’s ruling could mark the end of another season. He even wonders if the toppling of Mubarak was worth what has happened to his sport.

Soccer has a special place in an impoverished country such as Egypt, Tolba believes, and the players have a bigger role than just scorers and defenders in a game.

“It is important for us to do a good job. It distracts the country from politics and thuggery,” he said. But, he added sadly, “it will take some time for soccer to return to the way it was.”