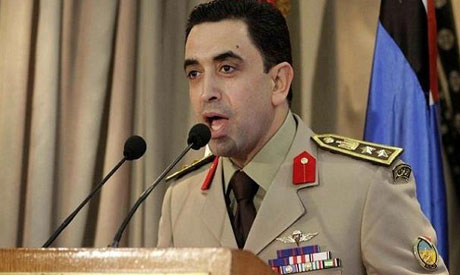 Earlier the same day, police forces withdrew from the restive canal city, including from the local security directorate, around which sporadic clashes between anti-government protesters and police have recently taken place.

Ali went on to say that Port Said residents had begun to form ‘popular committees’ to clean up the city in the wake of the clashes and provide security in conjunction with the armed forces.

According to Ahram Online’s Simon Hanna in Port Said, police officers have completely disappeared from the streets of the city on Friday.

« We extend our thanks to the people of Port Said for cooperating with the Second Army and for their efforts to secure and stabilise the city, » Ali said.

(…) Ahmed Abdel-Halim and Karim Atout are the latest victims of intermittent clashes that the city has seen since 26 January, when a court verdict sentenced 21 Port Said residents to death for their involvement in the February 2012 Port Said stadium disaster.

A shared feeling of injustice permeates the city as residents believe the verdict was politicised. They say there is evidence showing that the sentences were arbitrary and the defendants were scapegoated to hide the disaster’s real perpetrators. (…) 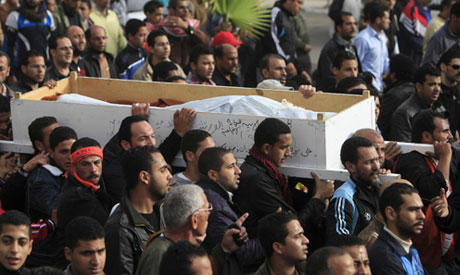 People against Egyptian President Mohamed Morsi carry the body of Ahmed Galal, who died during clashes between police and demonstrators, during his funeral in Port Said city

Early on Friday, the military announced the withdrawal of all police from the security directorate.

Protesters gathered at the square facing the directorate building and adjacent to the governor’s office were adamant about continuing their sit-in and pressing on with their demands, which include « retribution » for those killed and a retrial for those they deem to have been « unjustly » sentenced.

The sting of teargas from the night before continued to linger in the air as demonstrators recounted the violence they experienced.

« Karim [Atout]’s brain fell out of his head; they shot him from far away, » Nasrah Ibrahim, whom protesters call the ‘mother of revolutionaries,’ told Ahram Online. « He wasn’t a thug. »

Atout was declared dead by the health ministry on Thursday. He died of gunshot wounds.

« Birdshot and live ammunition were used, » he told Ahram Online, pointing to the stone-littered streets. « These were all the protesters could retaliate with. »

« There have been over 1000 injured protesters within a few days, » he added.

As  tanks rolled towards the security directorate in the early hours of Friday morning, many residents hailed the army, while standing on military vehicles, chanting « The army and the people are one hand ».

It was a scene reminiscent of the first army deployment prior to former president Hosni Mubarak’s ouster in 2011.

Indeed, as civilian casualties in clashes with the security forces rose sharply in the last few days in Port Said, some residents had called for the army step in in order to curb what they saw as out-of-control police.

However, others showed a degree of skepticism towards the army’s move to take control over the city after the police withdrew.

Earlier on Friday morning, Brigadier-General Ahmed Wasfi, commander of Egypt’s Second Army, told protesters gathered outside the security directorate and governor’s office that both buildings were empty. He urged the public to help military personnel « clean up surrounding streets and return Port Said to its former glory. »

However, when Wasfi added « I don’t want to see any tents erected; please help us clear the area to be able to clean it, » he was met with an angry response by the crowd, some of whom cheered for the army only hours before.

« Where were you for the past week when the interior ministry was attacking us? » protesters asked, as others tried to calm their angered colleagues.

As Wasfi spoke, armoured military vehicles rolled in as some people chanted « The military and army are one hand. » As army units took up positions around the government buildings, mixed reactions were evident among the crowd.

Revolutionary Socialists member Mohamed Wifqi told Ahram Online that he believed there was coordination between the police and the army and that the army’s replacement of the police brought one thing to mind: « People don’t want to confront the army, » he said.

« If the army is saving us from the police, as some believe, why didn’t they come earlier before people died? » Wifqi asked, adding that the army’s claim to be on the people’s side was « simply an act. »

Whether with the army or against it, Port Said protesters and activists interviewed by Ahram Online were insistent that their demands for justice be met.

Ali Aref, a driver and protester, told Ahram Online that an independent committee must investigate all the violent events that took place in Port Said, beginning with last year’s stadium tragedy.

« We will continue our sit-in until a committee with a conscience arrives, » Aref said.

Speaking to Ahram Online, Ibrahim El-Masri, a former Al-Masry club football player and spokesperson for the families of those slapped with death sentences, called the army deployment « irrelevant. »

« Who cares about the police withdrawal? Our demands haven’t been met. The army isn’t protecting us. Have they done anything to meet our demands? » El-Masri asked.

Opening a new investigation into the Port Said stadium disaster and the prosecution of those responsible for the death and injury of protesters topped the demands cited by El-Masri. (…)