Chief of Egypt’s Army Warns of ‘Collapse’ as Chaos Mounts

CAIRO — Egypt’s top military officer warned Tuesday of the potential “collapse of the state” if political forces in the country did not reconcile, reflecting growing impatience with the country’s growing unrest. 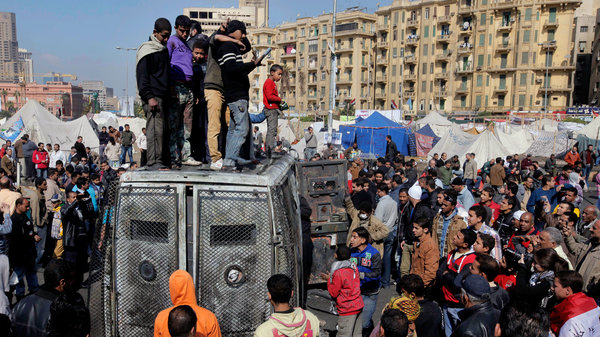 Egyptian protesters celebrated the capture and destruction of a state security armored vehicle on Tuesday in Tahrir Square in Cairo.

In a speech to military cadets that was distributed as a statement, Gen. Abdul-Fattah al-Sisi, the defense minister, publicly warned Egypt’s new Islamist leaders and their opponents that “their disagreement on running the affairs of the country may lead to the collapse of the state and threatens the future of the coming generations. » As such, General Sisi suggested, the polarization of the civilian politics was becoming a concern of the military because “to affect the stability of the state institutions is a dangerous matter that harms Egyptian national security. »

His remarks came as violence in Cairo began to escalate. During clashes between riot police and protesters along the Nile Corniche early on Tuesday, the fighting spilled into one of the city’s luxury hotels, leaving the lobby in ruins.

The worst of the turmoil, which has left at least 45 people dead, has been in Port Said at the northern tip of the Suez Canal. Egypt’s president, Mohamed Morsi, has imposed a monthlong state of emergency in the city and two others in the Suez Canal zone, calling on the army to regain control of security.

The state of emergency imposed by Mr. Morsi virtually eliminates due process protections against abuse by the police.

Angry crowds burned tires and hurled rocks at the police. And the police, with little training and less credibility, hunkered down behind barrages of tear gas, birdshot and occasional bullets.

The sense that the state was unraveling may have been strongest in Port Said, where demonstrators have proclaimed their city an independent nation. But in recent days, the unrest has risen in towns across the country. In the capital on Monday, a mob of protesters managed to steal an armored police vehicle, drive it to Tahrir Square and make it a bonfire.

After two years of torturous transition, Egyptians have watched with growing anxiety as the erosion of the public trust in the government and a persistent security vacuum have fostered a new temptation to resort to violence to resolve disputes, said Michael Hanna, a researcher at the Century Foundation, based in New York, who is now in Cairo. “There is a clear political crisis that has eroded the moral authority of the state,” he said.

And the spectacular evaporation of the government’s authority here in Port Said has put that crisis on vivid display, most conspicuously in the rejection of Mr. Morsi’s declarations of the curfew and state of emergency.

As in Suez and Ismailia, tens of thousands of residents of Port Said poured into the streets on Sunday in defiance just as a 9 p.m. curfew was set to begin. Bursts of gunfire echoed through the city for the next hours, and from 9 to 11 p.m. hospital officials raised the death count to seven from two.

When two armored personnel carriers approached a funeral Monday morning for some of the slain protesters, a stone-throwing mob of thousands quickly chased them away. And within a few hours, the demonstrators had resumed their siege of a nearby police station, burning tires to create a smoke screen to hide behind amid tear gas and gunfire.

Many in the city said they saw no alternative but to continue to stay in the streets. They complained that the hated security police remained unchanged and unaccountable even after President Hosni Mubarak was ousted two years ago. Protesters saw no recourse in the justice system, which is also unchanged; they dismissed the courts as politicized, especially after the acquittals of all those accused of killing protesters during the revolution. Then came the death sentences handed down Saturday to 21 Port Said soccer fans for their role in a deadly brawl. The death sentences set off the current unrest in this city.

Nor, the people said, did they trust the political process that brought to power Mr. Morsi and his Islamist allies in the Muslim Brotherhood. He had vowed to usher in the rule of law as “a president for all Egyptians.” But in November, he used a presidential decree to temporarily stifle potential legal objections so that his Islamist allies could rush out a new Constitution. His authoritarian move kicked off a sharp uptick in street violence leading to this weekend’s Port Said clashes.

“Injustice beyond imagination,” one man outside the morning funeral said of Mr. Morsi’s emergency decree, before he was drowned out by a crowd of others echoing the sentiment. 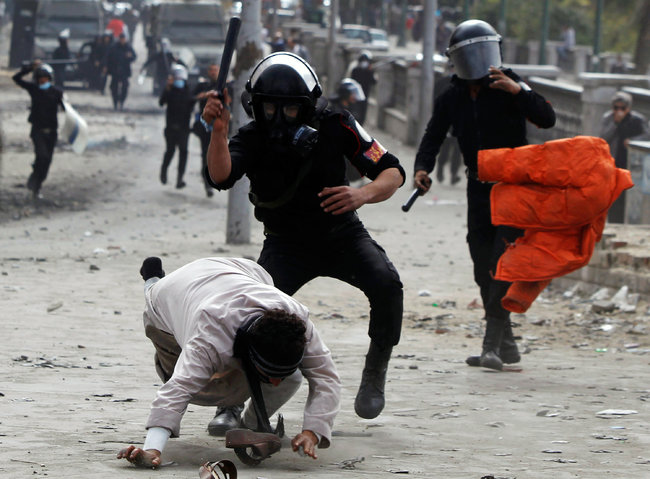 Riot police beat a protester during clashes in Cairo on Monday.

“He declared a curfew, and we declare civil disobedience,” another man said.

“This doesn’t apply to Port Said because we don’t recognize him as our president,” said a third. “He is the president of the Muslim Brotherhood only.”

Officials of the Muslim Brotherhood and its party could not be reached. The group had recently moved offices because of security threats, and at the new office, neighbors said Brotherhood officials had not appeared since the start of the unrest.

As tens of thousands marched to the cemetery, many echoed the arguments of human rights advocates that the one-month imposition of the emergency law and reliance on the military would only aggravate the problem. The emergency law rolled back legal procedures meant to protect individuals from excessive violence by the police, while the reliance on soldiers to keep the peace further reduced individual rights by sending any civilians arrested to military trials.

“It is stupid — he is repressing people for one more month!” one man argued to a friend. “It will explode in his face. He should let people cool down.”

The police remained besieged in their burned-out stations, glimpsed only occasionally crouching with their automatic rifles behind the low roof ledges.

When one showed his head over a police building as the funeral march passed, voices in the crowd shouted that his appearance was a “provocation” and people began hurling rocks. Others riding a pickup in the procession had stockpiled homemade bombs for later use.

In a departure from most previous clashes around the Egyptian revolution, in Port Said the police also faced armed assailants. Two were seen with handguns on Monday around a siege of a police station, in addition to the man with the Kalashnikov.

Earlier, a man accosted an Egyptian journalist working for The New York Times. “If I see you taking pictures of protesters with weapons, I will kill you,” he warned.

Defending their stations, the police fought back, and in Cairo they battled their own commander, the interior minister.

Brotherhood leaders say Mr. Morsi has been afraid to name an outsider as minister for fear of a police revolt, putting off any meaningful reform of the Mubarak security services. But when Mr. Morsi recently tapped a veteran ministry official, Mohamed Ibrahim, for the job, many in the security services complained that even the appointment of one insider to replace another was undue interference.

In a measure of the low level of the new government’s top-down control over the security forces, officers even cursed and chased away their new interior minister when he tried to attend a funeral on Friday for two members of the security forces killed in the recent clashes.

“What do you mean we won’t be armed? We would be disarmed to die,” one shouted, on a video recording of the event.

In an effort to placate the rank and file, Mr. Ibrahim issued a statement to police personnel sympathizing with the pressure the protests put on them. Later, he promised them sophisticated weapons.

“That can only be a recipe for future bloodshed,” said Hossam Bahgat, executive director of the Egyptian Initiative for Personal Rights, which monitors police abuses. 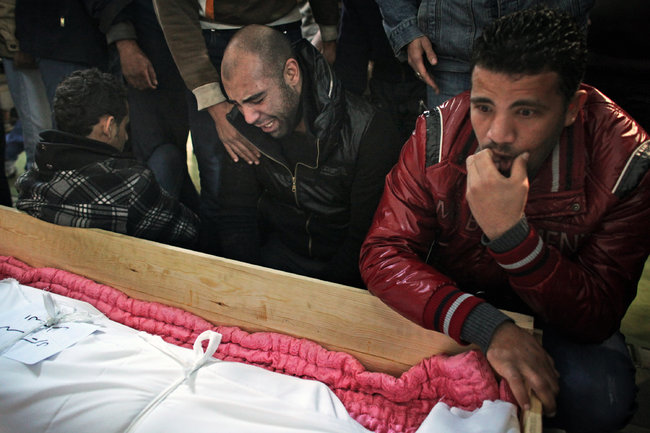 Egyptians on Monday mourned the death of Mohammed Yousra, 27, one of seven people killed in clashes with the police in Port Said.

By turning to the military, Mr. Morsi signaled that he understood he could not rely on the police to pacify the streets, Mr. Bahgat argued.

But it was far from clear that Mr. Morsi was fully in command of the military either. The new Islamist-backed Constitution grants the general broad autonomy within the Egyptian government in an apparent quid pro quo for turning over full power to Mr. Morsi in August. Mr. Morsi’s formal request for the military to restore order was “not so much an instruction as a plea for support,” Mr. Bahgat said.

It remains to be seen whether the military retains the credibility to quell the protests. The soldiers stationed in Port Said did nothing to intervene as clashes raged on in the streets hours after curfew Monday night.

Analysts close to the military say its officers are extremely reluctant to engage in the kind of harsh crackdown that would damage its reputation with Egyptians, preferring to rely on its presence alone.

Near the front lines of the clashes, residents debated whether they would welcome a military takeover. “The military that was sent to Port Said is the Muslim Brotherhood’s military,” said one man, dismissing its independence from Mr. Morsi.

But others said they still had faith in the institution, if not in its top generals. “In the military, the soldiers are our brothers,” said Khaled Samir Abdullah, 25. Pointing to the police, he said, “those ones are merciless.”