Clashes around downtown Cairo spill into early hours of Sunday

Clashes were ongoing on Youssef al-Guindy and Mohamed Mahmoud streets well into the early hours of Sunday, where protesters and security forces faced off near the Interior Ministry in downtown Cairo. 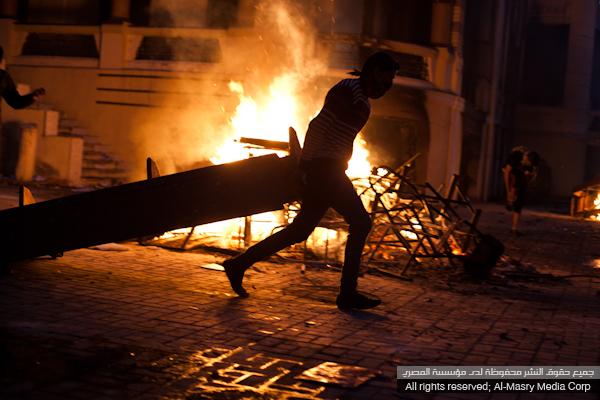 Security forces used intense amounts of tear gas in an attempt to disperse protesters, who responded by hurling rocks and Molotov cocktails.

Earlier on Saturday, clashes took place on Qasr al-Aini Street between security forces and protesters in front of the Shura Council, and raged for hours as they spread to other streets surrounding Tahrir.

Violence has been ongoing in cities across Egypt since Friday, starting with clashes that broke out on the 25 January anniversary, when mass protests took place denouncing the Muslim Brotherhood’s monopolization of power. Nine people were killed, mainly in Suez, where the army has been deployed.

The 6 October Bridge was blocked off intermittently Saturday evening and the fighting also reached the Garden City Corniche near the Qasr al-Nil entrance and the Semiramis Hotel, all the way down to Simon Bolivar Square. Tear gas was heavy in the whole area.

A security source said that the management of the three nearby hotels — the Semiramis and Shepherd hotels on one side, as well as the Hilton Ramsis overlooking Abdel Moneim Riad Square — were asked to close the gates and not allow anyone to enter or exit.

A fire that broke out late Saturday at the Lycee School on Sheikh Rihan Street had been contained, the same street where clashes had been taking place throughout the day. A security source told Al-Masry Al-Youm that the fire ravaged three classrooms and the school’s basement. There were also reports of a fire at the Misr Insurance office in Talaat Harb Square.

Late into the night, Tahrir was relatively and cautiously calm as fighting continued in surrounding streets, and the number of protesters there decreasing significantly.

There were also several reports of random arrests made during the day’s clashes.

Mohamed el-Beltagi, a leading member of the Muslim Brotherhood, called on President Mohamed Morsy to announce a state of emergency if necessary to contain the violence and « thuggery » that has engulfed several cities in Egypt.

He also called on Morsy and the prime minister as well as the ministers of defense and interior, to intervene immediately with « strenght and determination » to stop the death of citizens, and to prevent the burning of institutions as well as the blocking of roads, using all legitimate means.

The National Salvation Front, meanwhile, has said they will boycott the upcoming elections for the House of Representatives if Morsy does not meet their demands to form a « national salvation » government.

In a statement, the NSF said Egyptians should rally against the new Constitution and is calling for an unbiased committee to amend disputed articles in it.

The Front held Morsy responsible for deaths during the violence that has taken place in Ismailia, Port Said and Suez, as a result of protests commemorating the 25 January revolution and protests against the death sentence for 21 defendants in the Port Said trial.

The Port Said clashes death toll reached at least 31, according to the Ministry of Health, with more than 300 injured.

The National Defense Council, which is led by Mursi and includes the defense minister who commands the army, called for « a broad national dialogue that would be attended by independent national characters » to discuss political differences and ensure a « fair and transparent » parliamentary poll.

Back to the squares, without the Brothers!

Commenting on a Brotherhood statement saying “We will not be in Tahrir on the revolution anniversary,” a friend wrote on Facebook, “You weren’t in Tahrir on the original 25 January either.”

The Muslim Brotherhood’s absence from the party is one of the few similarities between proceedings on 25 January 2011 and during the 2013 redux. In 2011, during its awkward tango with the National Democratic Party, it announced that it would not be taking part in the demonstrations as an organisation, but that individual members were free to do so.

In 2013 it announced that it would not be taking part because it would be busy commemorating the revolution by planting trees and offering the Egyptian people vegetables at a discount price, which is apt, because it brings to mind a vulgar variation on the popular saying, “The world is like a cucumber: one day it’s in your hand, the other it’s in salad”, where salad is replaced with something anatomical. The MB have been thrusting cucumbers on us for six months now and very few have been anywhere near hands.

And so it was once more back to the squares and the streets, without the MB’s neatly bearded rank and file. The march routes and congregation points have remained the same, but the chants and placards have nearly all changed, as has the mood, and the march to Tahrir from Shubra felt like being reunited with a cantankerous pubescent teenager who you last saw as a mild infant.

The invective was all, inevitably, directed against the MB and its avuncular leader. There were very few articulated demands amidst this diffuse anger, perhaps because the situation has become so messy that neither the elegant simplicity of 2011’s unambiguous demand that the regime be brought down, nor 2012’s more complex attempts to fix a revolution that was already showing the first signs of going badly off course, will do.

The ambiguity was lent a surrealism by the presence of the Black Bloc, who made their grand debut in Egypt a few days ago.

Wrestling masks are always a strange sight, but particularly on a sunny Friday afternoon. Around 20 young men and a couple of women stood at the head of the march, arms linked, as in front of them what appeared to be their leaders, also in wrestling masks, flitted about nervously barking orders.

At one point they did some rhythmic clapping, but mostly spent their time attempting to tell bored photographers not to photograph them while standing in formation in matching wrestling masks. I attempted to have a chat with one of the leaders – a nice young man who was wearing spectacles over his wrestling mask – but he politely declined, saying that the group is “anti-media.”

I saw some of them later in the environs of Tahrir Square strolling about, still in their wrestling masks, like murderous flaneurs. One of their members was a paunchy middle-aged man in a shiny grey suit, another was a 10-year-old, indicating that this is not perhaps the spread of radical anarchism amongst Cairo’s restive masses but rather a penchant for wrestling masks, much as hard helmets were the big hit of 2011.

The Black Bloc were not much in evidence when the march was ambushed (according to an eyewitness) by denizens of the Souq al-Tawfiqeyya vegetable market, who availed themselves of building rooftops to welcome protesters with projected missiles.

This prompted a scene that was at once bizarre and indicative of just how confused everything is at the moment. Protesters began chanting “The people want the downfall of the regime” at their assailants. There was decidedly no regime involvement in the proceedings, so this was one group of civilians calling for the downfall of a regime at civilians above their heads. Maybe the chant was just a battle cry, but the polarization in Egyptian society that emerged after the revolution is more acute now than it has ever been in the past two years, thanks in large part to the crude “us versus them” rhetoric that currently passes as politicking.

The violence of yesterday’s protests, especially in Suez, is an articulation of a genuine seething, anger at this incompetent regime whose leader sees fit to address a nation in flux on Twitter at 2 am. But acts of civil disobedience – traffic blocking and Metro stoppages – are unlikely to go down well with the majority of Cairenes, who like general publics everywhere, only want a quiet life. This is particularly true given that there has been an aimlessness about some protests such as the largely ignored sit-in in Tahrir Square, a lack of vision, which if it hasn’t lost protesters support certainly hasn’t gained them new followers.

Reactionary or apathetic general publics aren’t essential in the great scheme of things, since it is always a minority that initiates change, but questions have to be asked about the effectiveness of these unchanging tactics, which are beautiful when they work but risk becoming staid, like coursing water that manages to wear an indent in a rock but then becomes trapped in a path of its own creation. 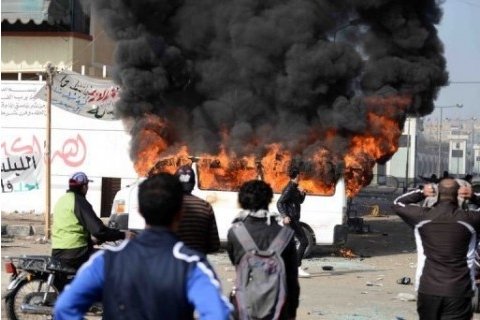 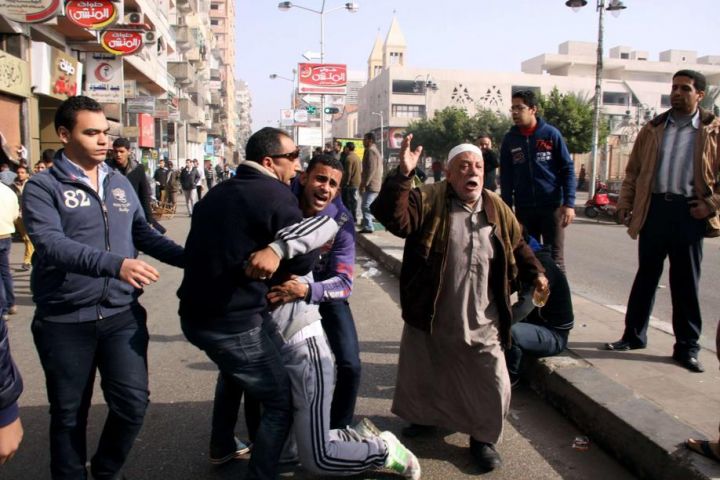 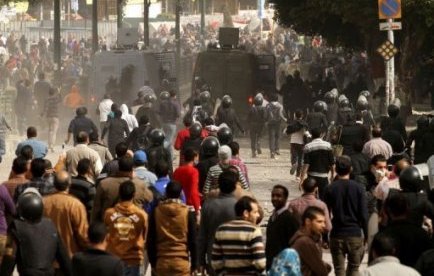 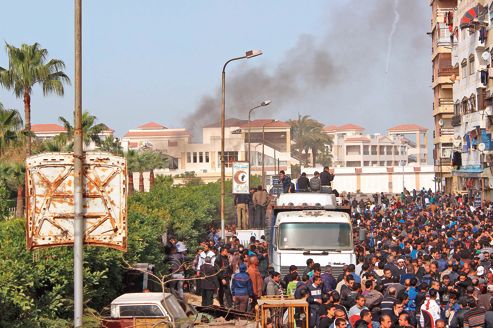