CAIRO: Egyptians woke on Sunday to a massive new concrete wall erected on Qasr el-Aini street leading to Cairo’s iconic Tahrir Square. Police then moved down a side street and began a new barrage of tear gas and rubber bullets at demonstrators stationed in Tahrir Square. 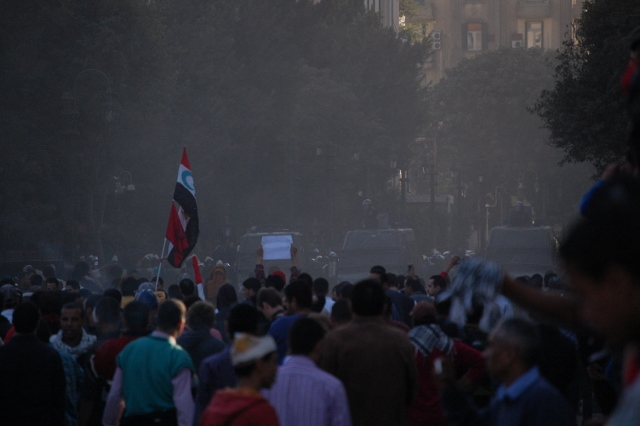 Armored vehicles made an entrance on Qasr el-Aini street around 2:30 PM on November 23, 2012, raining down tear gas barrage after another on protesters.

Activists on the ground told Bikyamasr.com that they are “attempting to encircle us” as the ongoing crisis over President Mohamed Morsi’s decree that delivers him near absolute power continues to face backlashes.

On Saturday, violence erupted across the country, with Muslim Brotherhood supporters of the president attacking anti-Morsi protesters in the Nile Delta cities of Damanhour and Mahallah.

Scores of protesters were injured in the violence, with injuries including rubber bullet wounds, tear gas inhalation and others, medical sources said.

Back in Cairo, the focal point of the ongoing battle for change in Egypt, the violence peaked on Saturday evening and early Sunday as dozens of police carriers and armored vehicles entered the central Cairo area. This led to massive pushes by the police.

And then the wall went up, making it the latest addition to the other dozen walls placed sporadically around the city.

« Morsi Go » is written in Arabic on the road in Cairo’s Tahrir Square on November 24, 2012, a day after opposition-led protests were held in most of Egypt’s major cities sparking violent clashes in the canal city of Suez and the Mediterranean city of Alexandria. 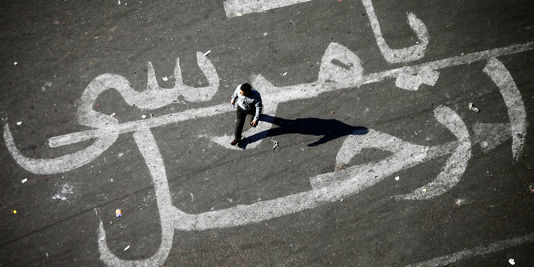 Activists in Tahrir Square are concerned that as the frontlines move to new areas, the police are planning a massive attack that they argue is similar to the action of police during the January 2011 uprising, which saw some 1,000 Egyptians die in ousted Hosni Mubarak from power.

“I just watch and see what is happening and I fear for people’s lives,” said Hassan Hossam, a 25-year-old activist who has been at the frontlines of all action in Cairo over the past two years.

He told Bikyamasr.com that if the police continue to push and use this kind of force, he wonders if they will stop.

“We saw the worst violence on bridges in 2011, and now they are pushing people towards those same bridges and into the open space of Tahrir. This is not good and while I will continue to have my voice heard, I am becoming worried over what is happening,” he said.

For many, the police action against the demonstrators has highlighted the need for change. Many have said they will not stop until Morsi apologizes to the country for trying to be like Mubarak.

“He has as much power as Mubarak did, so why would we not take to the streets? He told us to,” Yussif, a 29-year-old writer told Bikyamasr.com in reference to an earlier speech Morsi gave calling on citizens to “revolt” if he took too much power.

But now that they have taken to the streets, in Cairo and elsewhere, the heavy hand of the state continues to wield itself down on protesters, with tear gas and rubber bullets near continuously making their way into the crowds.

Many believe there is no turning back now.

Egyptian activists have announced they would remain in Cairo’s Tahrir Square until President Mohamed Morsi withdraws his presidential decree that ostensibly grants him unlimited power.

The National Assembly for Change has urged other political groups, parties and movements, to join the sit-in in Tahrir as a show of force against what they called a power grab that places Morsi above the rule of law.

Around a dozen tents have been erected in the center of the square and protesters appear determined to push on with their demonstration until Morsi makes changes.

The Assembly said it is disappointed by the recent moves made by Morsi concerning the drafting of the constitution and said they would not stand by and allow the president to take as much power as ousted President Hosni Mubarak had until he was ousted in a popular uprising in January 2011. 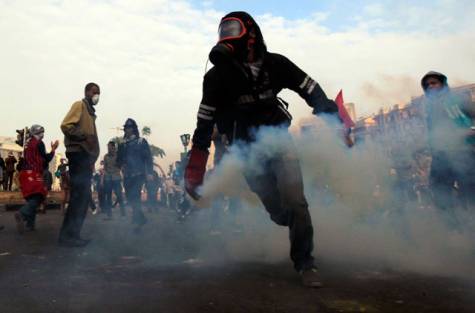 A protester runs as he returns a tear gas canister to the riot police in Tahrir, Cairo November 25, 2012.

Day of Rage turns to day of clashes

Hundreds Egyptian protesters have been injured in ongoing violence in downtown Cairo on Qasr el-Aini street leading to the iconic Tahrir Square, the ministry of health reported.

Activists and field hospital officials believe the number to be dramatically higher.

According to volunteer doctors at field hospitals scattered around the frontlines, the injuries consist mainly of tear gas inhalation, however many of those being wounded have “been shot by rubber bullets.”

The violence, which is the continuation of the previous four days, increased in dramatic fashion on Friday afternoon, following anger over President Mohamed Morsi’s constitutional declarations that activists say has left the country in the hands of the ultra-conservatives and silences those who fought for freedom during the January 2011 uprising that ousted former President Hosni Mubarak.

According to the ministry of interior’s Facebook page, Minister Ahmed Ibrahim reportedly ordered police officers to be “patient” and “to work” with the different revolutionary powers. He also said on state television that no tear gas had been fired into Tahrir Square, where tens of thousands have gathered into the evening, saying they will not leave and have begun an open-ended sit-in demanding change in the country.

The ministry said that police arrested 210 protesters, 85 of whom were transferred to the prosecution’s office and are being held pending investigation for 15 days, and 45 under aged youth were released and had been given to the custody of their parents.

Morsi, for his part, spoke to the nation on Friday afternoon as violence spiraled into chaos in downtown Cairo, telling the country that “thugs” were responsible for the violence. State television also reported that nobody was in Tahrir Square, which online activists said was the same tactic used by the Mubarak government on January 25, 2011, when protests that eventually ousted him from power erupted.

Many believe this could be the beginning of a second uprising that is already demanding the end of Morsi’s rule.

Both makeshift hospitals inside al-Dobarah church and Tal’at Harb street both confirmed the arrival of people shot with rubber bullets. doctors said following an early evening attack that Bikyamasr.com saw 8 protesters arrive with rubber bullet wounds near Qasr el-Aini street, while doctors in Tala’at Harb said about 7 cases were reported.

Bikyamasr.com encountered a mother in her mid fifties roaming the end of Sheikh Rehan street, a few steps away from the fronlines of the clashes, searching for her two sons.

“I can’t leave them and I can’t go in to look for them,” she said in distress as more tear gas was fired at the protesters. “Is this the justice we asked for or is it the ramblings of a crazy man,” said the mother, referring to President Morsi’s recent decree.