Two people have been shot dead at Harmony Gold’s mine in Carletonville, seemingly thanks to rivalry between NUM and Amcu members at the mine. 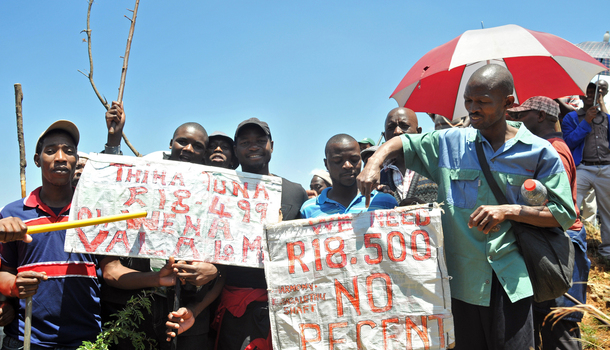 Two people have reportedly been shot dead and one injured at Harmony Gold’s Kusasalethu mine in Carletonville. While the details are unclear, the shootings seem to stem from the rivalry between National Union of Minerworkers (NUM) and the Association of Mineworkers and Construction Union (Amcu) members at the mine.

According to Sithembile Nqulo, who works at the mine, mineworkers were on their way to a mass meeting when NUM shop stewards opened fire on them. He said the NUM were threatened by the Amcu’s presence among the workers. « The NUM wants to lead us by force, » he said.

Another mineworker Lennox Tshisa, speaking an hour after the shooting, said it was difficult to know how the shooting started. « We just heard shooting and the police are now here, » he said. « But I can confirm that one Amcu member was shot on the knee. »

SAPS Gauteng spokesperson General Mohale said the police were still gathering details of the incident and have not yet prepared a statement.

But Johanna Tlokopsi, an official at the SAPS Carletonville branch, confirmed that two mineworkers had been killed and one injured.

But security guards did not kill the dead mineworkers, she said. “Mineworkers shot at their co-workers,” said Tlokopsi.

Harmony Gold executive of corporate and investor relations, Marian van der Walt, said the company could not comment on the details of the shooting but that the incident was related to union rivalry. « I can say that there is friction between the Amcu and NUM factions. Amcu has a strong presence on the mine and force and violence has been used by unions to get their way, » she said.

Workers at Harmony Gold’s Kusasalethu mine downed tools in unprotected strike action on October 3 but the company said the majority returned to work on October 25.