Syrians have repeatedly shown that they refuse to accept the tyrannies of either Bashar Al Assad or any extremist group that tries to impose its vision upon them. In the last couple of months, strengthened by American and Iraqi army weapons captured in Iraq, the Islamic State (formally ISIS and known locally as Daesh) has made dramatic gains in north and eastern Syria. Where it has gone it has imposed its hate-filled, reactionary interpretation of Islamic Law and severe restrictions on local people, committed sectarian massacres and other atrocities such as crucifixions and beheadings, and assassinated and imprisoned revolutionaries. But in the eastern province of Deir Al Zour, close to the Iraqi border, local popular resistance is now doing what the Syrian regime and American-funded Iraqi army failed to do; it is forcing Daesh out. 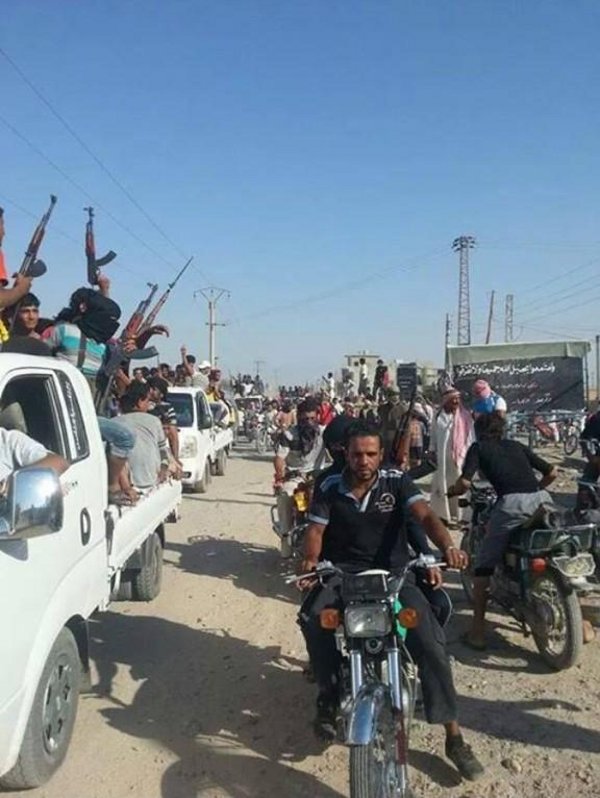 A convoy of Deir Al Zour residents to support the Shueitat resistance. Via: Yalla Souriya

Deir Al Zour fell to Daesh at the beginning of July when ISIS rivals Jabhat Al Nusra and Ahrar Al Sham pulled out of the area. For months they had been under siege by both the Islamic State and the Syrian regime leading to massive shortages in ammunition, food and water. A few weeks ago representatives of the Free Syrian Army (FSA) and the Syrian National Coalition petitioned the international community to send weapons, money and food to FSA battalions based around Deir Al Zour. They cautioned that if Deir Al Zour fell, the Islamic State would control important gas and oil reserves in the region as well as transport routes between Al Raqqa in northern Syria and Mosul in Iraq. Failing to gain international assistance, rebel formations retreated and Deir Al Zour province fell into the Islamic State’s hands. Local and tribal forces were also made to surrender, or at least agree not to fight Daesh.

But the people of Deir Al Zour have continued to organize demonstrations against the Islamic State. In this video from 22 July people from the Euphrates valley town of Albukamal (Abu Kamal) are holding a demonstration in the market place, chanting “Daesh leave!” Small, secretive groups known as Kufn Al Abiyyad (the White Shroud) have been formed to carry out assassinations of Daesh militants and attacks on Daesh positions. Previously, the fight against Daesh had been carried out by large, well known FSA and Islamist battalions.

On the 30 June, resistance against Daesh spread. Daesh arrested three people from the Shueitat tribe, breaking a deal between the two sides which had been made when Daesh fighters took over local villages. The reason for the arrests is unclear, but some reports suggest it was because the young men had fired celebratory gun shots at a wedding. Following the arrests local people took up what little weapons they had and issued a call for an uprising against Daesh in all the villages and towns. Following fierce clashes with Daesh this popular resistance movement, supported by some of the largest tribes in the area and residents from other villages who came to their aid, managed to liberate the villages of Abu Hamam, Kishkiyeh, and Granij.  Despite their superior arms Daesh were outnumbered. At least nine Daesh fascists were killed and others arrested. Daesh premises were burnt down in a number of Deir Al Zour villages. In this video members of the Shueitat tribe celebrate the liberation of the villages.

Support for the resistance of the Shueitat quickly spread to other parts of the province with locals in Mayadin, Suwaydan and elsewhere also rising up against Daesh extremists. In Albukamal the locals have continued to hold protests against Daesh as shown in this video from 3 August. On 4 August Deir Al Zour rebels, who had previously left the province after the Daesh takeover and went to Qalamoun to avoid handing over their weapons to the group, announced the formation of a new battalion. Around a dozen groups have united to form the Usud Al Sharqia (Eastern Lions) with the objective of fighting the Islamic State.

In neighbouring Iraq, the tribes from Anbar province have also voiced support for the Shueitat resistance and called on Daesh to leave. There are reports of local rebellion against Daesh in some Iraqi towns and villages. Kurdish forces, including women’s battalions, continue their brave battle against the extremists on both sides of the border. There are increasing calls for Kurdish forces to unite following the execution of some 88 Yezadi Kurds by Daesh in the town of Sinjar. 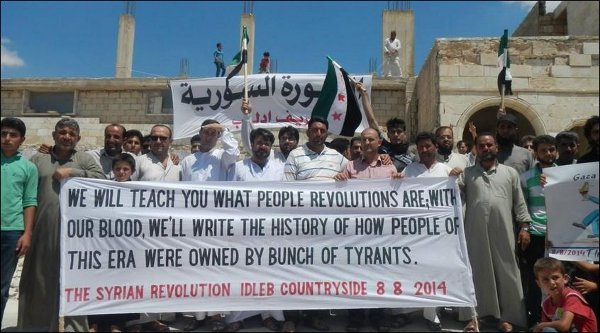 The Syrian revolution may be under attack from all quarters, but people have once again shown that the desire for freedom is not easily crushed. The Deir Al Zour intifada shows that dynamic, self-organized, popular resistance remains a powerful challenge to all forms of authoritarian control.