Where Metal Spikes Meet The Homeless: In London « The Destitute Are Now Considered Vermin »

First, the world’s oligarchs slowly but surely took over London real estate, where as we reported last week, home prices in May soared by the most in 12 years, and now, according to the Telegraph, in order to make London into an even more exclusive enclave where only the uber-wealthy can rub shoulders, assorted luxury buildings are installing metal spikes on the ground outside to fully deter homeless people from sleeping (and hence living) there. In other words, in London homeless people have been relegated to pigeon status, as the same technique has been long used to prevent rats with wings from landing, and defecating, at select locations. 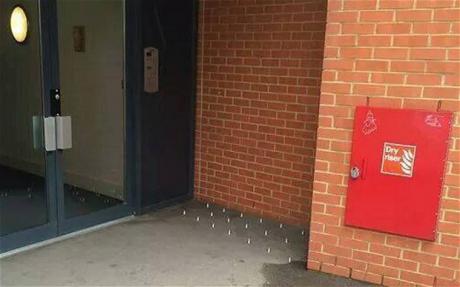 Andrew Horton, 33, of Woking, Surrey, took the picture of the inch long studs outside the flats on Southwark Bridge Road as he walked to work on Wednesday.

Mr Horton said: « I can’t say for certain but it certainly looked like they were placed there to deter homeless people. « It’s dreadful. »

David Wells said on Twitter: « These Anti homeless studs are like the spikes they use to keep pigeons off buildings. The destitute now considered vermin [sic]. 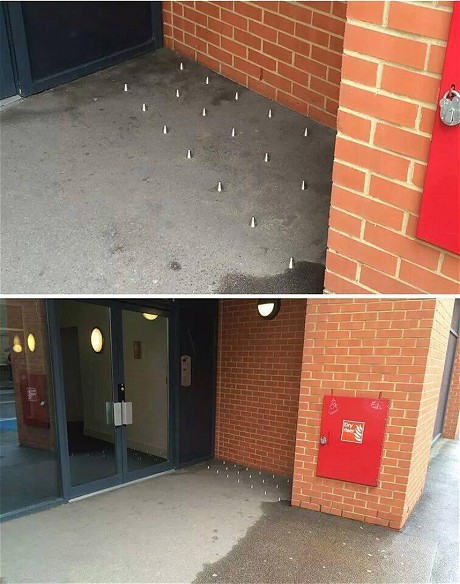 Not everyone is a stud humanist: others defended the metal protrusions.

Gavin Logan said on Twitter: « There will be a context behind those anti-homeless spikes. Possibly a last resort against someone who was aggressive and refused housing. » People living in the flats, which sell for upwards of £800,000, said the metal studs were installed two weeks ago after a number of homeless people were seen sleeping there.

One woman resident, who asked not to be named, said: “There was a homeless man asleep there about six weeks ago. « Then about two weeks ago all of a sudden studs were put up outside. « I presume it is to deter homeless people from sleeping there. »

A couple, who also asked to remain anonymous, added: « It’s because of the homeless. « The spikes have only been there very recently, less than a month. »

One guy asked the pragmatic question:

A man looking around the flats, a ten-minute walk from Southwark Underground Station, said the spikes would not put him off. The man, who only gave his name as Peter, a lawyer, said: « But would you want homeless people outside your door? »

Still, yet others prefer to simply ask philosophical questions:

Kathrine Stokes, 39, of Hull, East Yorkshire, photographed studs outside Tesco in Regent Street, London and uploaded the picture on Twitter. She said: « It’s sad. It demonstrates a meaness and a lack of humanity for people. »

Katharine Sacks-Jones, head of policy and campaigns at homelessness charity Crisis, said: « It is a scandal that anyone should sleep on the streets in 21st century Britain. Yet over the last three years rough sleeping has risen steeply across the country and by a massive 75 per cent in London. » Behind these numbers are real people struggling with a lack of housing, cuts to benefits and cuts to homelessness services to help them rebuild their lives.

« They might have suffered a relationship breakdown, a bereavement or domestic abuse. They deserve better than to be moved on to the next doorway along the street. We will never tackle rough sleeping with studs in the pavement. Instead we must deal with the causes. »

Thank the Bank of England.

As for Tesco, it decided to simply lie:

Tesco said the spikes outside its store in Regent Street were not intended to target those in need of shelter. A Tesco spokesman said: “The studs were put in place to try and stop people engaging in anti-social behaviour like smoking or drinking outside our store, which can be intimidating for our customers.”

That said, since the world’s central banks have managed to make the world’s top metropolises sufficiently gentrified to where only the uber wealthy can afford to live there, the poor should thank their lucky stars that they only have to deal with sharp spikes instead of, say, moats and land mines near luxury buildings (that said it is only a matter of time before that thought experiment becomes reality).

After all, in a world in which justice has a standard for the 1% and everyone else, a few blown up homeless would surely be classified, in the passive voice of course, as « accident that have happened due to glitch. »

And now, back to economists writing profound books discussing the record divergence between the world’s rich and poor.