A Russian lawmaker who believes gay groups should be shut down and anti-gay laws enforced accidentally marched alongside a gay rights protest. 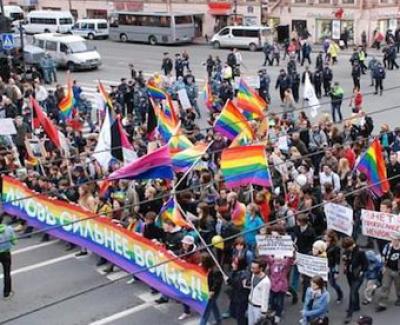 Hundreds of LGBTI activists joined the largest protest so far against Russia’s anti-gay laws since they were introduced yesterday (1 May).

With a large rainbow banner reading ‘Love Is Stronger Than Hate’, around 300 protestors marched through the streets of St Petersburg fighting for their rights.

Some held rainbow flags, some carried the pink, blue and purple flag representing bisexuality, and others held posters calling for love, not hate.

The march coincided with a May Day rally, with numerous groups and organizations taking part in the event.

Vitaly Milonov, the notorious lawmaker in St Petersburg who was the co-sponsor of the gay propaganda law, also marched.

There was no reported violence.

The activists were allowed to march as they had the permission of the authorities to take part, one of the very few to get pass the anti-gay laws.

Inspired by their success, LGBTI activists will make another powerful statement on 17 May, the International Day Against Homophobia, Biphobia and Transphobia.

They hope to hold a rainbow flashmob, gathering in a public square and launching balloons of different colors into the sky.

Nikolai Alekseev, a LGBTI activist in Russia, said: ‘What happened in St Petersburg was very cool, but it is still far from a trend.

‘The authorities are continuing to ban the freedom of expression, and courageous people like these ready to face insults and fists are the ones that are making a difference.’