I was in Kyiv. To anyone who hasn’t yet been there – I advise you to go. Especially if you claim to have an opinion about Kyiv.  As they say, one look is worth a thousand words. 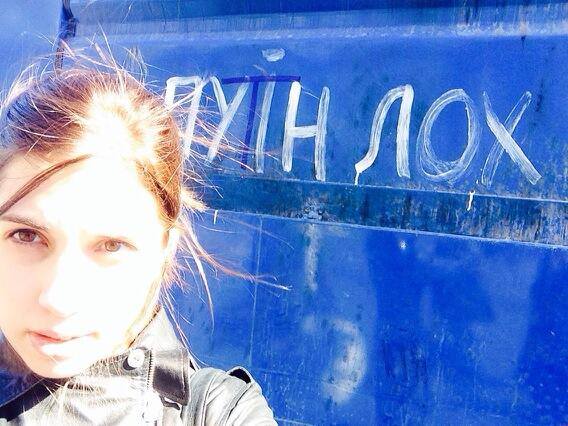 On the eve of my trip to Kyiv I asked my internet-kitties on Twitter the following question: Can anyone give me instances of any recent violence by extremists in Kyiv? On March 29, on the eve of my departure for Kyiv, Putin in a telephone call to Obama had specifically complained about rampages by extremists. I did not get a single response to my question. The masses of Kremlin trolls who swamp my account, didn’t manage to deliver. Poor things.

And so, what became clear to me as a result of my trip to Kyiv?

One. It’s peaceful in Kyiv. I didn’t get attacked even once by “bands of neo-Nazis.” My purse did not get snatched. Although I walked around the streets at night.  And in spite of the fact that generally speaking, you don’t see any policemen in the city. Here ‘self-organization’ is not simply a pretty word. On Maidan and Khreshchatyk everything is in perfect order. Clean. Rubbish is automatically collected and carefully packed up.

Two. I did not observe any looting.  On the contrary, I observed that Sberbank Russia – the bank of the aggressor nation, located on the Maidan itself, in the midst of the barricades, did not have a single pane of broken glass, not a single scratch.

Three. I spoke in Russian – and did not get slapped in the face. I got smiles and words of thanks that there are Russians who do not support the aggressor Putin. Sturdy men from Lviv explained to me and Alekhina and Verzylyov why we need to shake off Putin in our own country.

Four. “We love Russians, we despise Putin.” This slogan, very likely, more than anything else reflects the mood of Kyiv at this time. It’s not an accident that such a banner hangs in the middle of Maidan – on the frame of that same Christmas tree, from whose installation on November 30, 2013 everything began, when the Berkut beat up the students.

Five. Maidan is a place of unbelievable power. Candles in memory of the heroes of the Heavenly Hundred, masses of flowers. A list of names the dead, read out at midnight from the stage of Maidan: “Eternal memory!” Children’s drawings, dedicated to the fallen. The words of the priest from the stage: “Thank you for your patience! And thank you for tolerating me for so many months…” True faith, a priest who is a true Christian.

Six. I hope that everything will turn out well for them. And perhaps, the consciences of  our putins and kiseliovs will awaken, and they will stop scoffing at people who have already lost too many and too much, yet in spite of this, have managed to hold their own. 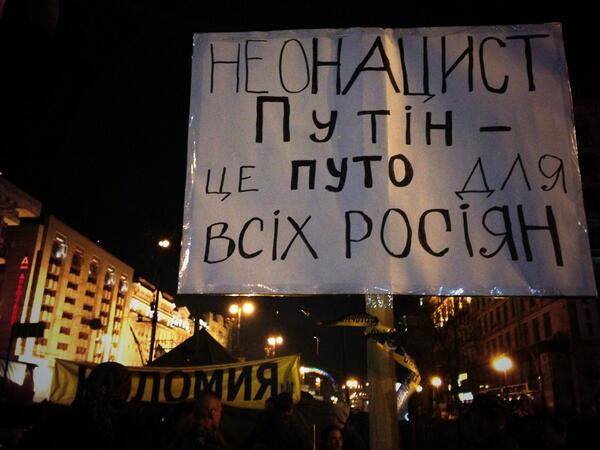 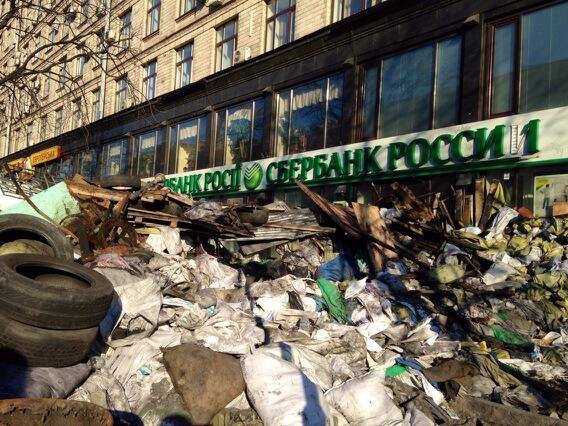 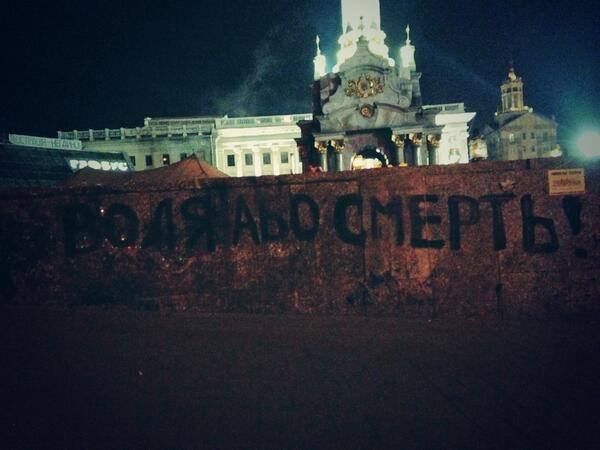 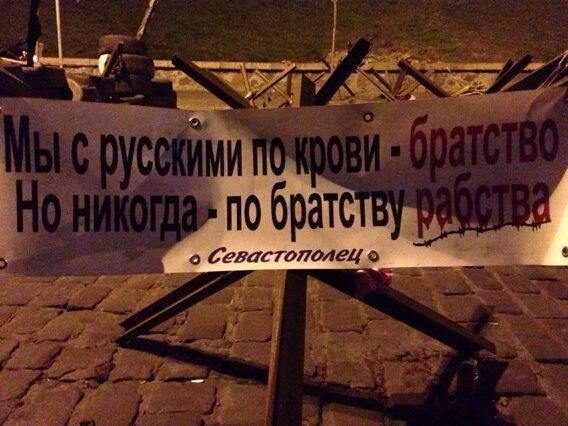 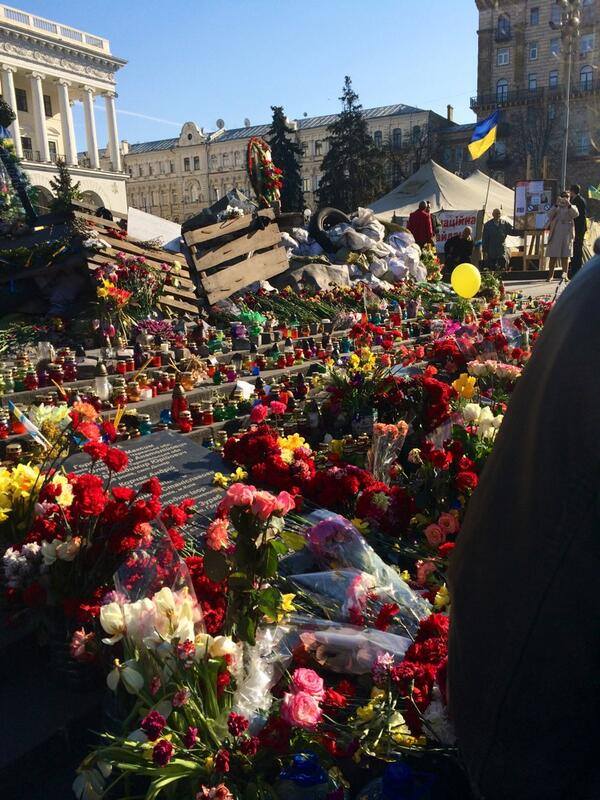 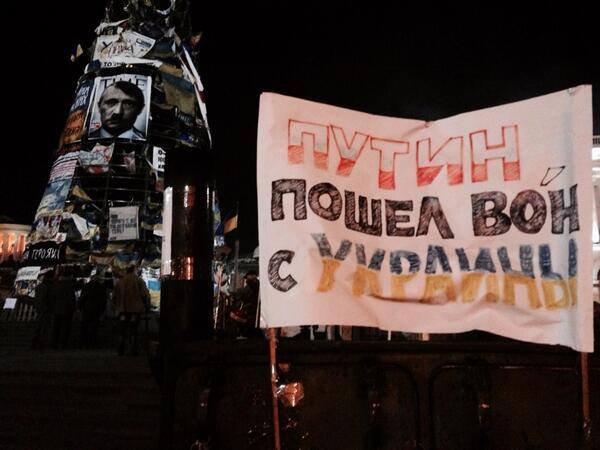 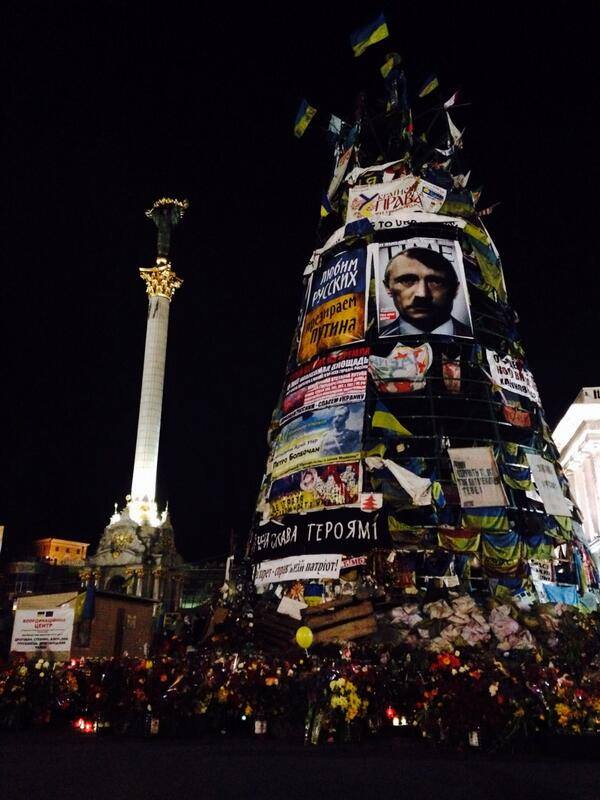