Copwatch, police in the viewfinder

On Monday 27 May an hour long ‘copwatch’ documentary was aired on a Canal+, a national French tv channel, linking monitoring of police brutality in Paris, Lille, New York and Calais. 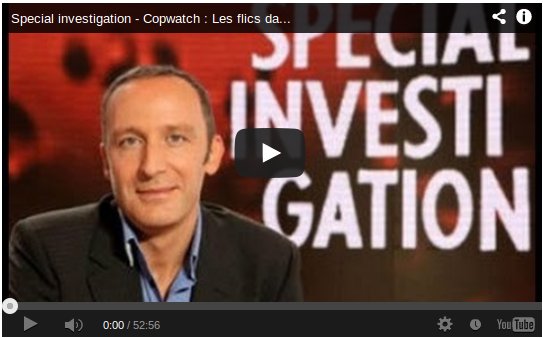 The investigation ends with Calais; profiling some of the years of footage No Borders have documented of police harassment and abuse in the streets and squats; arbitrary and repeated raids, ID controls and arrests of undocumented (and documented) people.

It gives insight into the aggression, violence, threats, intimidation, sexual propositions, insults and sadistic behaviour of policing in Calais, which is very much the norm against sans papiers, asylum seekers and refugees – as well as against those who document or intervene. Including examples of cops’ consistent attempt to stop people filming by smashing their cameras.

The film also gives homage to our missed comrade, Marie Noelle, one of the first people in Calais to document, confront and disrupt the police head on.

And also singles out some of the more brutal border cops in Calais.

Here in France it is illegal to publish footage of cops without their consent. It is of course in the interest of the authorities to keep the reality of policing hidden and control information; to keep a hold on the propaganda machine as mouth piece to sensationalist reporting that legitimizes their xenophobic policies.

But despite their threats and draconian measures to control people and information, people continue to expose, intervene and subvert their regimes. Persecution of people will be met with resistance, and will not be silenced.