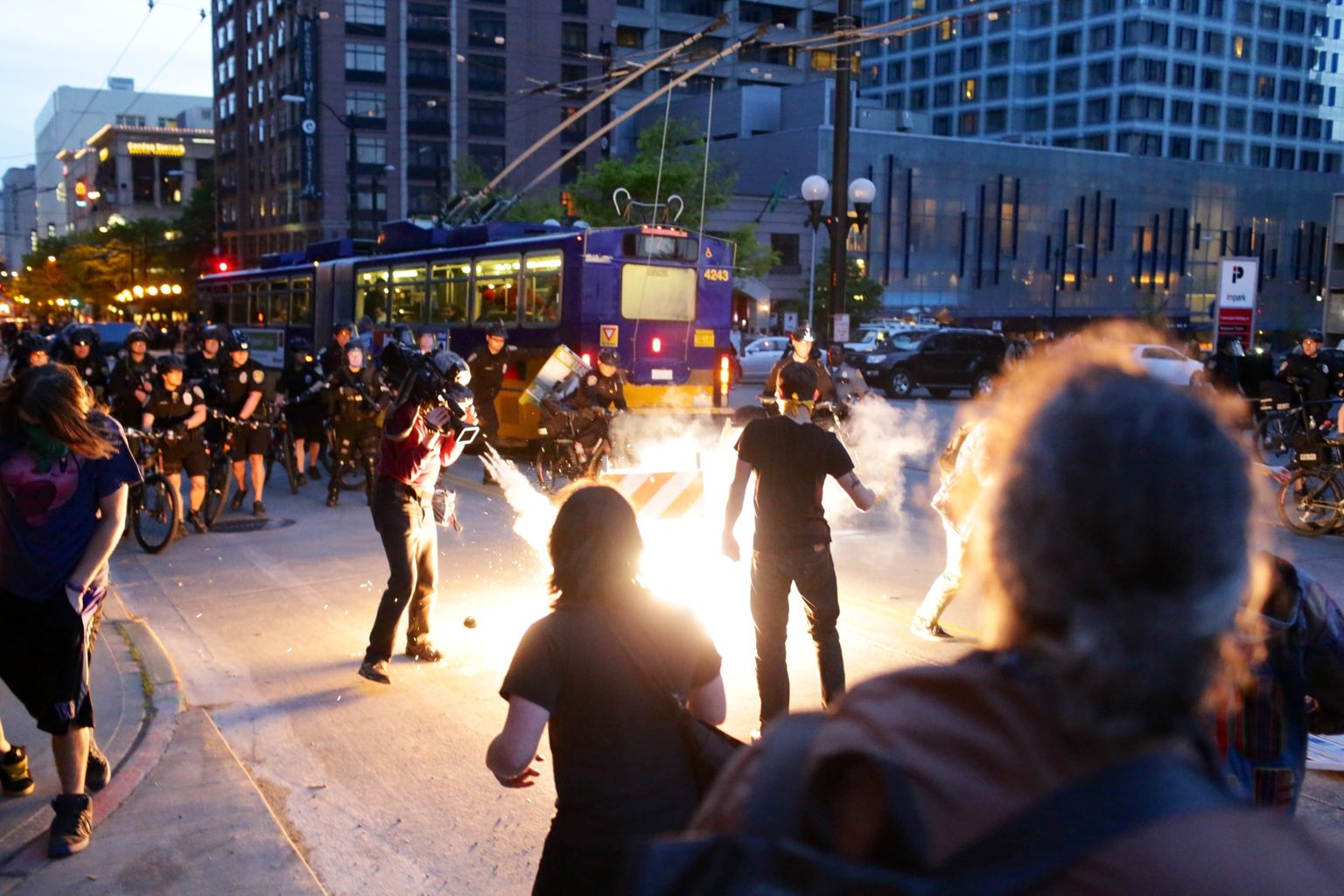 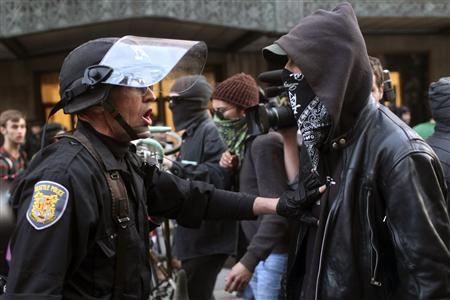 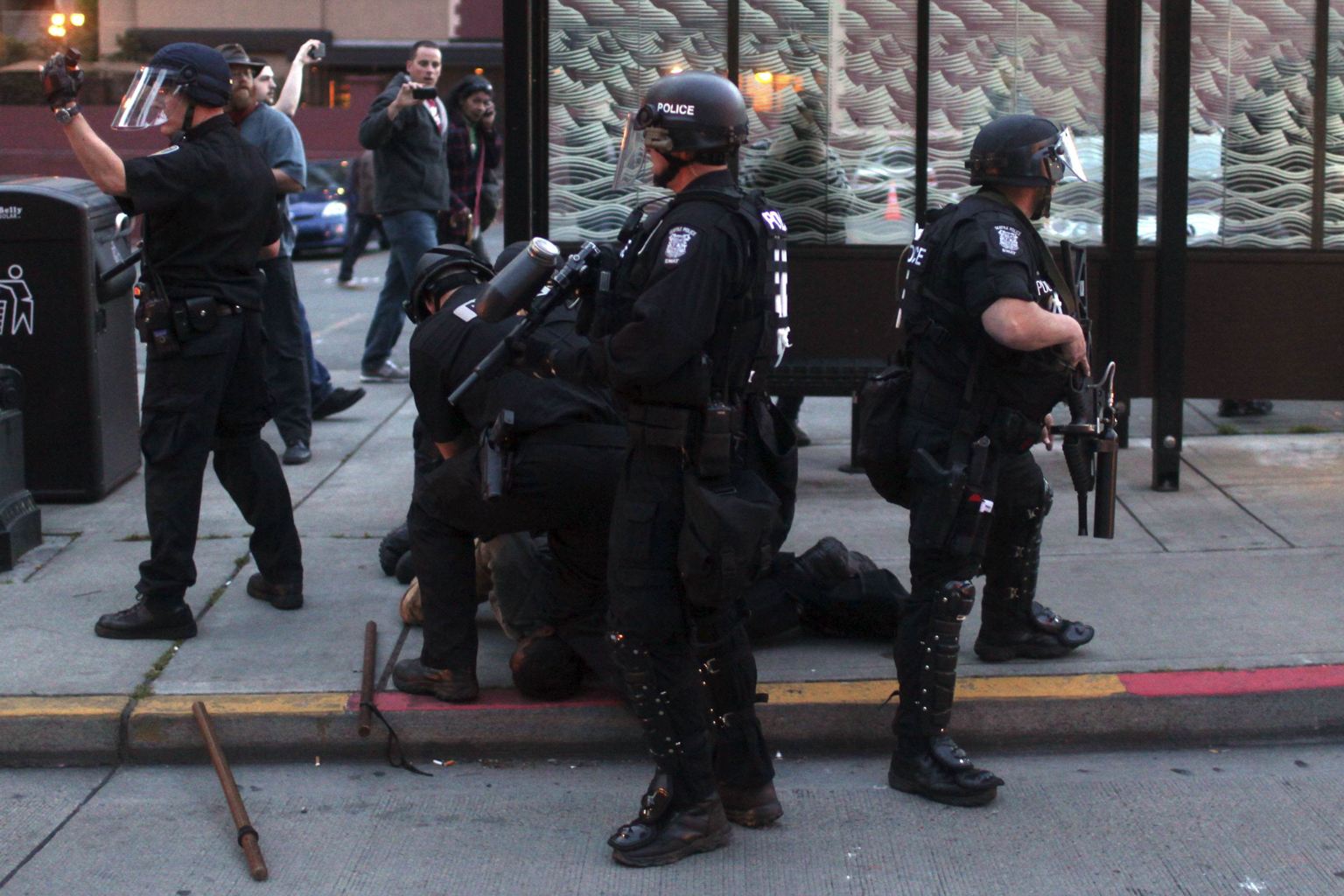 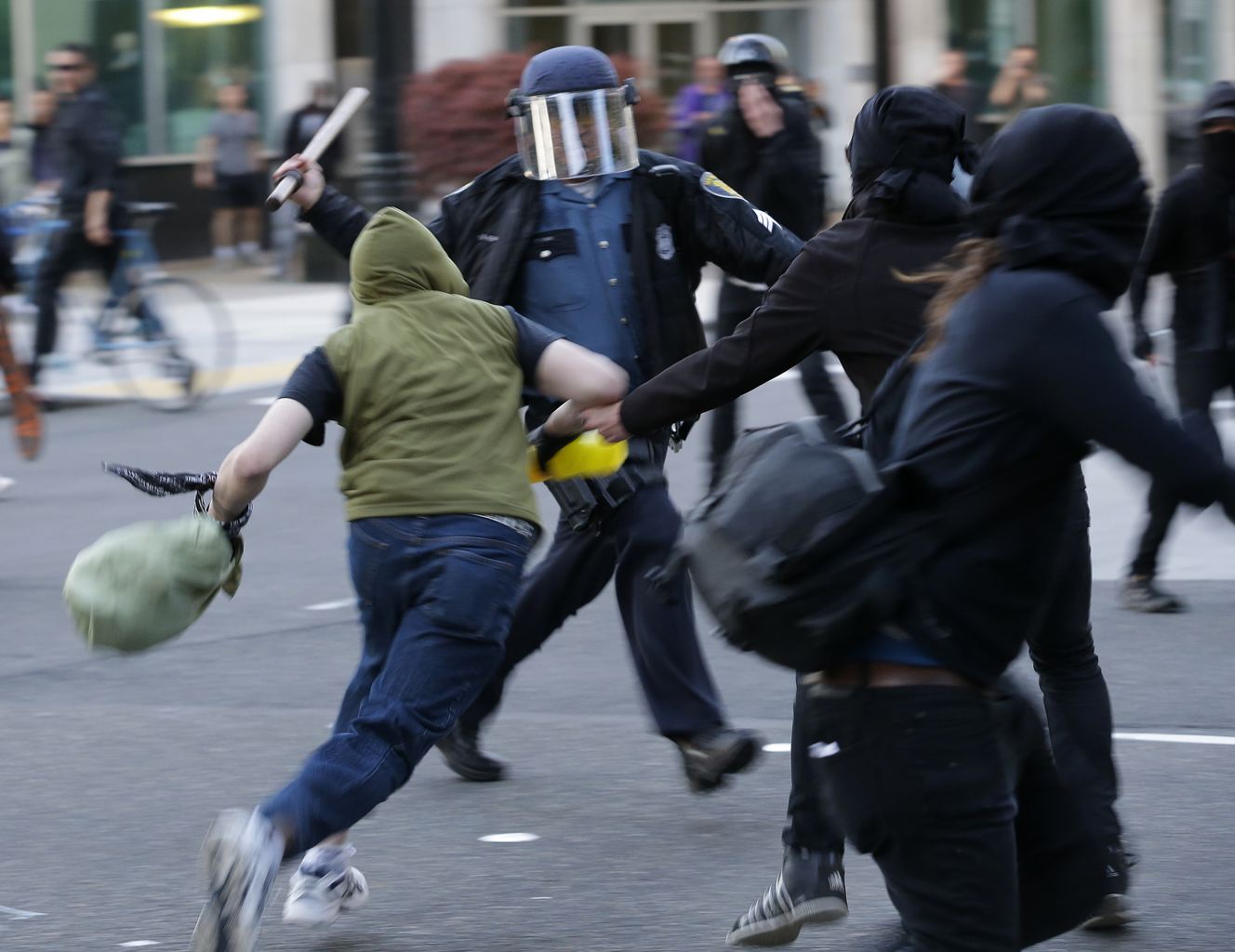 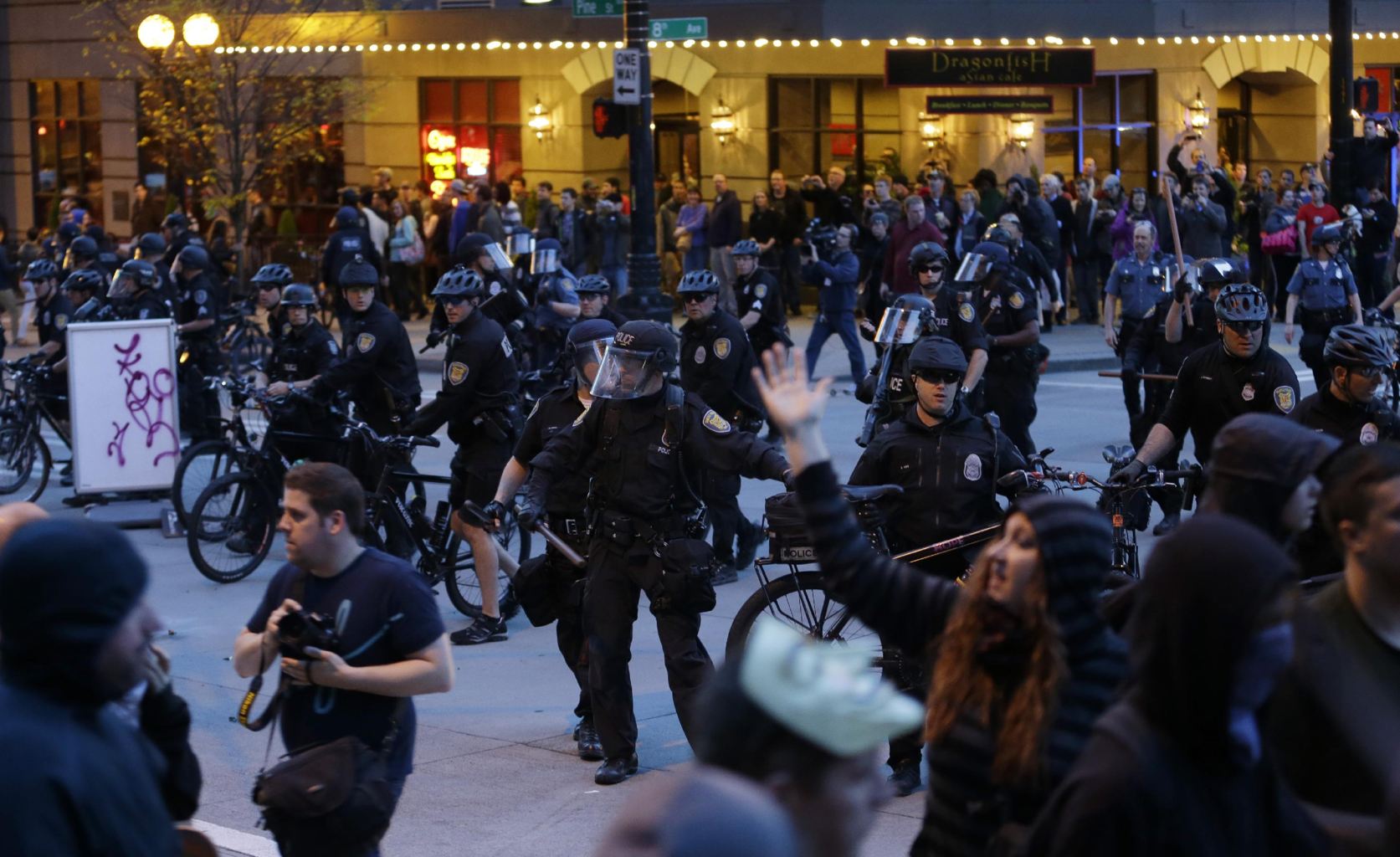 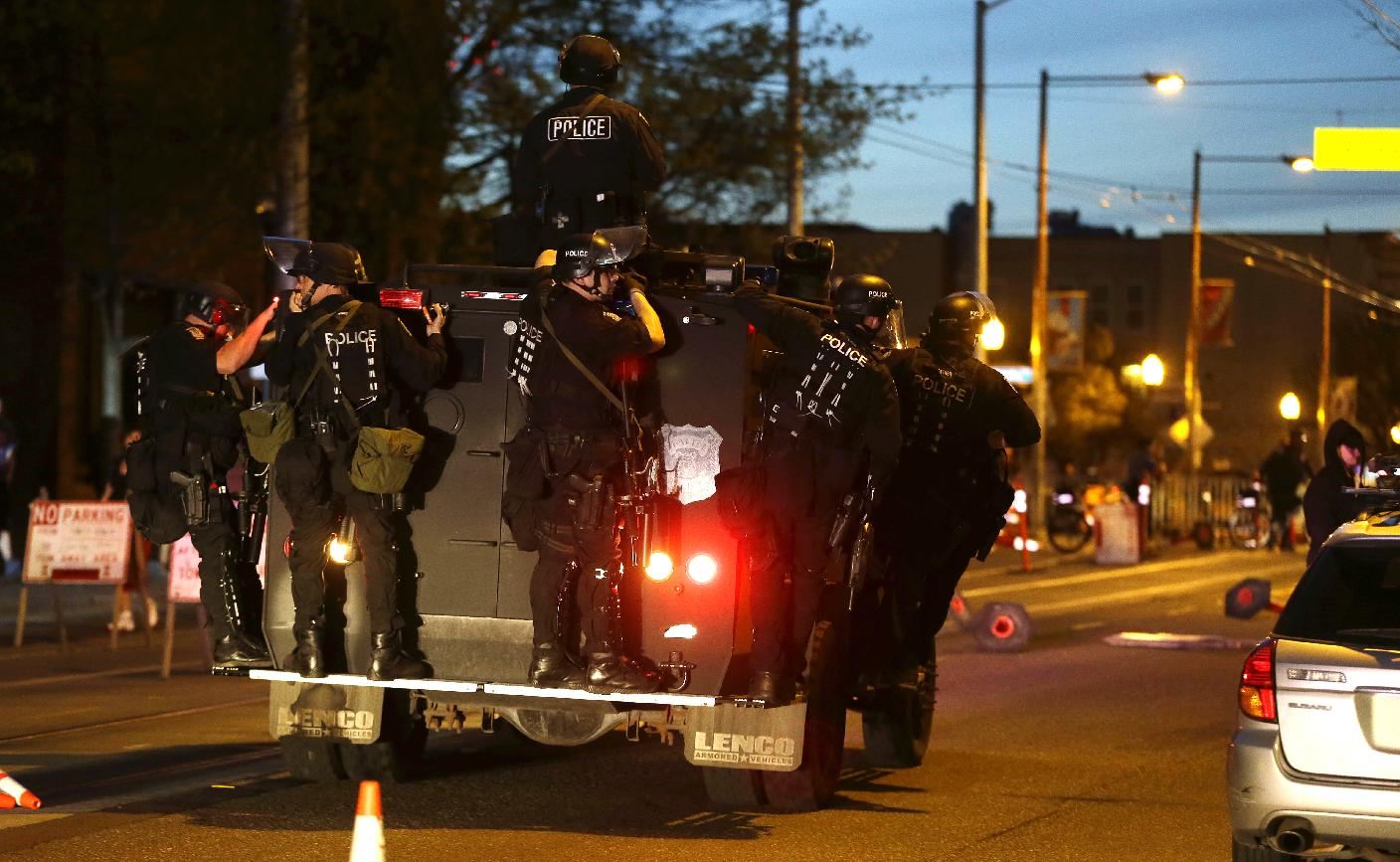 SEATTLE (AP) — Police used « flash bangs » and pepper spray against some protesters who pelted them with rocks and bottles late Wednesday, as violence erupted during May Day in Seattle.

Protesters threw rocks and bottles at police officers and news crews. As they moved through downtown Seattle to another nearby neighborhood, they flung construction street barriers, trash cans and newspaper bins on the streets in an attempt to block advancing police officers. Windows of local businesses were broken and vehicles with people in them were banged around.

« We’re a bigger and better city than this. I look at this and I am disappointed that this is the picture the world sees of us, » Seattle Mayor Mike McGinn said late Wednesday.

Police used their bikes to shield businesses and eventually began to use pepper spray and « flash bang’ grenades — releasing a flash of light, smoke and a loud noise — to disperse the crowd. But that pushed the group to the Capitol Hill neighborhood, and they left a wake of overturned trash cans and debris on the street, as well as smashed windows on local businesses.

In the aftermath, 18 people were arrested, the Seattle Police Capt. Chris Fowler said.

Fowler said that eight officer were injured, mostly scrapes and bruises. One officer was hit by a rock on her knee.

The violence stemmed from a march that billed itself as an « anti-capitalism » protest. Initially, the protesters concentrated on a business sector of downtown Seattle.

Despite lacking a permit to march, Seattle police escorted them as through downtown.

« That first march came downtown. It was absolutely peaceful…it was almost a festive affair and they had some serious messages, too, that they wanted to express. No incidents whatsoever, » McGinn said. « The second march was very different, and it wasn’t just merely because it was unpermitted. I think it also had to do with the nature of the individuals in it and what they wanted to do. »

There were no immediate cost estimates of the damage left.

This is the second year in a row violence has broken out during May Day in Seattle. Last year, anarchists broke windows of store fronts, including Niketown, and vehicles and used smoke bombs. Protesters also targeted a federal building, breaking windows and doors.

Olivia One Feather of Covington joined the crowd Wednesday night because she wanted to see how police handled the protest. She said she wasn’t impressed, adding that she was pepper sprayed in the face while trying to video record officers.

Of the protesters, she said, « They’re doing what we need to do to stand up to ourselves. These are our streets and we have the right to take them. »

Many of the protesters are self-described anarchists. A local anarchist website said protesters would attempt to disrupt May Day.

After the clashes died down, local residents were seen cleaning up trash left by the protesters.

The violence marred a May Day that immigrant-rights activists hoped would put a focus back on immigration reform. Thousands of people marched about 2 1/2 miles from the Central District toward Seattle’s downtown Jackson Federal Building after a May Day rally supporting immigrant rights and labor.

Many carried signs, with messages such as « We are America, » and « There are no illegal humans. » One sign suggested forgetting about marijuana and instead asking the United States to « Legalize my mom, » a reference to Washington’s recent legalization of marijuana.