The protests in Egypt aren’t limited to the presidential palace, Tahrir Square and a pro-Morsi protest earlier at Al-Azhar in Cairo. 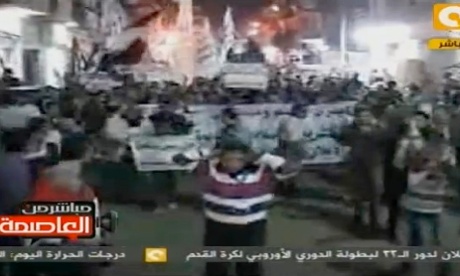 An opposition rally in Asyut, Egypt, from about 7:15pm local time. Screen grab from ONTV.

ONTV also is covering an anti-Morsi march in Asyut, along the Nile south of the capital (screen grab below). Clashes were reported earlier in the day in Sharkiya, northeast of Cairo, in which police used tear gas to disperse crowds.

UPDATE: Protesters in the industrial city of Mahalla have ejected the city council and announced their autonomy from the “Muslim brotherhood” state, Sara Abou Bakr of Egypt Daily News reports, among others:

“We no longer belong to the Ikhwani state,” they announced from the city council.

Mahalla is known for its clashes with the police in 2008 which some analysts consider to be the spark of the January 25 2011 revolution.

Anti-government protesters in Mahalla, Egypt’s largest industrial city, have reportedly taken over the local city council and announced their autonomy from the state ruled by the Muslim Brotherhood. 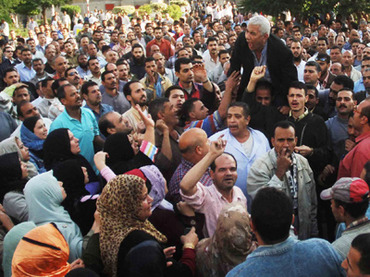 ­Protesters threw the head of their city council out of the building, announcing they “no longer belong to the Ikhwani state,” the Daily News Egypt reports.

Workers have attempted to create a « revolutionary council » and rule the industrial city, report suggests. The head of the Mahalla City Council, Ismail Fathy, however, denied the claims.

“The demonstrations, which attracted around 3,000 people, were peaceful,” he told satellite TV channel CBC in a phone interview. “Nothing of this sort happened.”

“I was in Mahalla all day, I did not see any of this happening,” he told CBC.

El-Mahalla el-Kubra, a city north of Cairo home to 450,000, was dubbed the cradle of the Egyptian revolution. The opposition April 6 movement was formed there in 2009, and the first major anti-government protests also took place there.

Meanwhile, unconfirmed reports circulating on Twitter suggest that protesters in four more Egyptian cities – Alexandria, Kafr Sheikh, Sharqaya and Sohag – have declared independence, announcing that President Morsi and the Muslim Brotherhood have lost the legitimacy to rule following the deadly clashes in Cairo that left at least seven people killed and hundreds injured.

The Egypt Independent confirmed clashes between opponents and supporters of President Morsi in Alexandria on Friday evening, adding that demonstrators had broken into the city’s local council building. 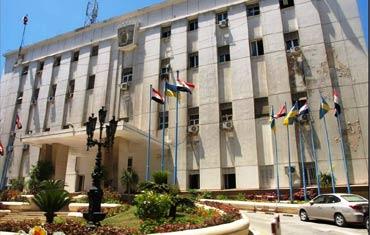 Mise à sac du gouvernorat d’Alexandrie
22:15 Al-Ahram Arabic website reports that hundreds or anti-Morsi demonstrators in the northern coastal city of Alexandria ransacked the governorate’s headquarters, expressing anger at the killing of other protesters Thursday at the hands of what they described as « armed militias affiliated to the Muslim Brotherhood. » Minutes later, a group of men wielding firearms and bladed weapons chased protesters out of the building. Fire shots were heard in the surrounding area. No reports on injuries are available yet. (Presse contre-révolutionnaire – english.ahram.org.eg, 8 décembre 2012)

The Egyptian opposition has declared independence of the northern province of Alexandria from the « Islamic regime.” According to local media, hundreds of opponents of President Mohammed Morsi attacked the local administration building and declared their sovereignty.

Almost immediately several vehicles with armed men appeared on the scene. According to incoming information, the so-called Islamic militia attacked the opposition, driving it out of the governor’s building.

Later, clashes spread to nearby streets, gradually developing into skirmishes. Shots can be heard in the vicinity of the fighting. Presently, large crowds of protesters opposing the regime are heading there.

Previously, the town of El-Mahalla el-Kubra and Mansoura north of Cairo were declared « free from the Islamists.”

The series of announced « sovereignties » began with El-Mahalla El-Kubra – a town of 450 thousand, located 100 kilometers north of Cairo. It is considered the cradle of the Egyptian revolution. In 2009 it witnessed the rise of the first oppositional “April 6 Movement, » and the first major anti-government protests.

Currently, clashes between supporters and opponents of the president are continuing in many Egyptian cities, including Ismailia, Suez, Port Said. Thousands of people took to the streets of Luxor, to support the opposition.

Revolutionary committees and youth movements have declared independence in the Egyptian town of El-Mahalla el-Kubra. A five thousand-strong crowd seized the town administration, and unfolded a banner of the united Egyptian opposition – the National Salvation Front.

El-Mahalla el-Kubra, a town of 450 thousand, north of Cairo, is dubbed the cradle of the Egyptian revolution.

It was here in 2009, that the opposition April 6 movement was conceived, and the first major anti-government protests took place.

In a statement posted on social networks, the revolutionary committees declared independence of El-Mahalla el-Kubra from Gharbia province to which it is assigned, as well as from the rest of Egypt, « in protest against Mohammed Morsi’s constitutional declaration decisions.”

The separatists have announced intention to form their own presidential council. (…) 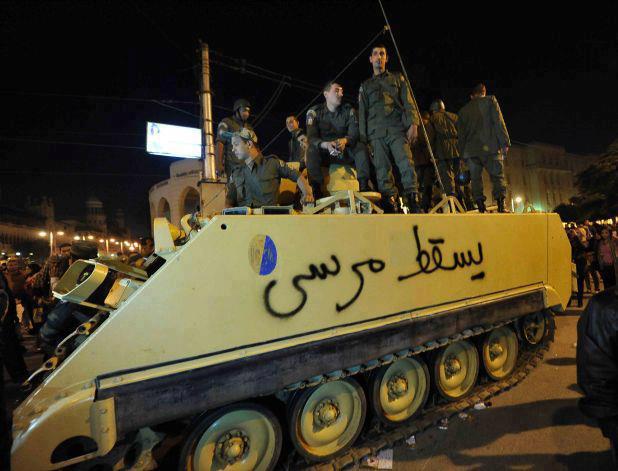 Once again the 20,000 workers at Misr Spinning in Mahalla have taken the lead in challenging the Egyptian regime. They have rejected president Mohamed Mursi’s constitutional amendments and the rule of the Muslim Brotherhood.

Workers in the mill called a protest at the end of the first shift on 27 November. The demonstration set off amid chants about the dire situation and the continuation of policies hostile to the popular classes. The workers called for an end to the Muslim Brotherhood’s rule.

Large numbers of local people and revolutionary groups joined the protest as it set off for the centre of town, chanting “The people demand the fall of the regime”.

As the demonstration reached Shoun Square in the town centre, protesters were attacked by members of the Brotherhood’s Freedom and Justice Party who threw fireworks and missiles at them.

The square was turned into a battlefield and around 400 were injured as protesters fought back with bricks and Molotov cocktails. The security forces arrived much later and launched a barrage of hundreds of tear gas canisters.

The Revolutionary Socialists’ statement “Workers of Egypt, rise up against the constitutional declaration and poverty!” was distributed on the protest.

The statement argues that Mursi sees protests by workers as the main enemy. His efforts to secure exceptional powers are aimed at suppressing workers who demonstrate to demand the completion of the 25 January 2011 revolution and social justice.

Mursi’s moves come after a huge wave of sackings and victimisation of workers’ leaders failed to stop an unprecedented rise in workers’ struggles.

The workers and people of Mahalla have reminded the political elites now jockeying for influence after the fall of Hosni Mubarak that their uprising on 6 April 2008 was a dress rehearsal for the 25 January 2011 revolution.

On that day revolutionaries in Mahalla tore down the dictator’s picture and endured every kind of abuse in order to claim freedom and justice.

Meanwhile the Islamists and liberals alike have omitted workers’ demands and rights from the draft constitution. This document is completely devoid of any rights for the popular classes to health care, education or decent pay.

The Mahalla workers’ mobilisation is an important step in linking anger at their worsening living conditions to the current political struggle. This process has already become apparent in mobilisations by other workers who have recently begun to adopt political demands.

Metro workers during their strike demanded that their director resign and that old regime elements be kicked out. Workers in privatised companies have demanded renationalisation. In the new industrial cities, workers have been fighting to take control of their factories as bosses threaten to shut them.

The initiative of the Mahalla workers opens the door to other sections of the workers’ movement to enter the political struggle.

We should remember the role that workers played in ending Mubarak’s rule. Hundreds of thousands joined strikes and sit-ins, forcing the dictator to quit in terror that the revolution would turn into a popular revolution against the rule of the businessmen.

This could lead to the creation of a workers’ state and the adoption of a new social order based on the redistribution of wealth in society and the people’s ownership of factories and land.

Revolutionaries—and at their heart, revolutionary socialists—must be agitating throughout the working class for strikes and sit-ins against the constitutional declaration which criminalises strikes. They must link this tyrannical declaration with the economic policies hostile to the poor.

This is what will give the protests in the squares immeasurable power and influence over the authorities, because the working masses can halt the wheels of production and stop the delivery of services. Workers can force the government to respond to political and social demands.

The fusion between political and economic demands will be achieved when millions of workers decide to join the revolution in their workplaces. Then we will witness the dawn of a new society and overthrow the system of exploitation and poverty.

We don’t want simply to recycle the people at the top—from Mubarak to Mursi, from Mursi to ElBaradei. We want new policies biased in favour of the majority—and this will only happen if millions of workers take part in the political struggle for the overthrow of the regime.