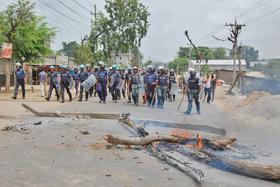 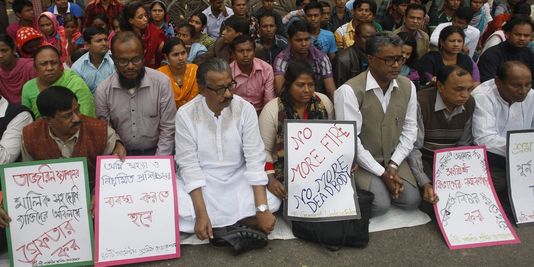 Garment workers vandalise cars, windowpanes for not keeping it closed.

Hundreds of garment factory workers vandalise leather goods manufacturer Picard Bangladesh Ltd at Zirabo of Ashulia yesterday afternoon apparently for not keeping the unit closed as the garment workers demanded. They also broke down the main gate and vandalised the waiting room and six cars parked there. At least 50 workers and security guards of the factory were injured in the attack.

At least 50 guards and workers of an export-oriented leather factory were injured when several hundred garment workers attacked the company’s premises and vandalised six of its vehicles in Ashulia yesterday.

Located at Pukurpar in Zirabo of Ashulia, Picard Bangladesh Ltd, a Bangladesh-German joint venture, came under attack from the workers at around 3:00pm as its owners, like many readymade garment factories in the area, did not give in to their sudden call for production suspension.

« At least 50 of our staffers, most of them female, became victims of the attack. Over 25 of them were hospitalised with severe injuries, » Musleh Uddin Ahmed, a deputy manager (store) of the factory, told The Daily Star.

Picard Bangladesh, which employs 1,200 people, manufactures leather hand bags, briefcases and small leather goods for exports. Apart from manufacturing its own brands, it produces products for customers based in Australia, Europe, Canada, Japan and Singapore, according to the company’s website.

Witnesses and officials said the trouble started with a fire panic at a the factory of Mascot Group in the area, which left 50 of its workers wounded and prompted its owners into declaring the remaining day off for workers at its three factories.

When its workers came out of the factory, those in other factories in the area followed suit fearing attacks.

Garment workers gathered on the road in front of Picard Bangladesh and started agitating, demanding production suspension at the factory at around 2:45pm, witnesses said.

Several hundred workers broke open the main gate and attacked all the units housed in three separate buildings of the factory in around an hour of the rampage, the witnesses said.

They also damaged six vehicles of the factory, which were parked on the factory premises.

A visit to the factory after the vandalism revealed that all glass, windowpanes and furniture of the building had been damaged, vehicles smashed and flower tubs in the garden broken. Ashes caused by fire were seen at the main entrance of the factory.

During the attacks, around 15 policemen were seen hiding for safety inside a building in front of the leather factory when the attackers looted valuables and vandalised the factories, creating a panicky situation among the workers, security guards and officials of the factory.

« The unruly workers first started damaging the window panes of the factory by pelting brick chips. At one stage, they stormed it by breaking its main gate made of heavy steel, » said Mohammad Shahjahan, a security guard of the leather factory, who suffered severe injuries when he fell under the broken gate.

Shahjahan said, « Soon after the attackers stormed into the premises, they went violent. Many of them resorted to vandalism from outside the buildings, equipped with various sticks and brick chips while many others ran into all the buildings for looting. »

Saiful Islam, managing director of Picard Bangladesh, said, « At one point of the violent attack, I along with my daughter [Amrita Markin Islam, who is also the head of business of the factory], had to hide in the strong room to save our lives. »

He said the attackers either might have been the workers of various RMG factories or criminals.

One of the leading entrepreneurs of the country, Saiful vented his anger over the reluctance of the police to respond.

« We begged for the security of our lives from the police by phone. You (police) please come. But the police did not come on time, » said a frustrated Saiful, standing at the factory premises, which were littered mostly with broken glass and brickbats.

« Today, we were really afraid for our lives. There is no security of our lives, our factories, » he said.’

His daughter Amrita Makin Islam, who is head of operations and business development, was present at the time of the attacks.

« What is my fault? Have I committed any mistake by setting up industries in the country and exporting from this country? » Saiful asked.

He told Industrial Police director Golam Rouf: « If you (police) had reached on time, such severe damage might not have been caused to the property. »

« You know, it is a Bangladesh-German join venture. Now what shall I tell them about it? » he asked.

Industrial police, however, said they had tried their best.

Golam Rouf said, « We have done our best. We dispersed the attackers and saved the factory from their bid to burn it down. »

He, however, acknowledged the limitations of the police and said they had to make their way to the factory through several agitations and clashes by the workers of many other factories in the area.

Thousands of garment workers from the factories in Ashulia staged demonstrations and clashed with police on Sunday in Savar’s Jamgarah Bus Stand area.

About 100 were injured at the clashes, most factories in Ashulia were announced shut for the day.

Police dispersed them, firing tear shells and rubber bullets, to resume traffic on the road at 12:30pm.

Ashulia Industrial Police’s Deputy Director Moktar Hossain told bdnews24.com several workers from another factory attacked and vandalised a bag manufacturing factory, Peakered Bangladesh Limited, on Saturday at the Pukurparh area. The workers of the factory requested the authorities to announce a holiday on Sunday.

The workers gathered on the street outside the factory. Authorities at more than a hundred factories announced suspension of work for the day to avert tension seeing so many workers together, Hosain said.

He said police drove off a group of workers by lobbing tear gas shells when they tried to barricade the Shimrail-Zirabo road in the morning.

But several thousand workers from over 100 factories started their agitation blockading the Dhaka-Tangail highway, the police officer said.

The two sides locked horns as the law enforcers tried to drive them off the highway, Hossain said.

Workers in the Ashulia industrial belt have been demonstrating since the death of at least 110 fellow workers in the worst factory fire on Nov 24 at the Tazreen Fashions Limited. They have staged demonstrations on every business day since last Monday.

The factory authorities had announced a four-day holiday to avert tensions in the area.

Bangladesh is the second largest exporter of readymade garments after China and the sector contributes to nearly 80 percent of the country’s export earning.

The Ashulia industrial belt houses over 350 garment factories out of the country’s 3,500 factories.