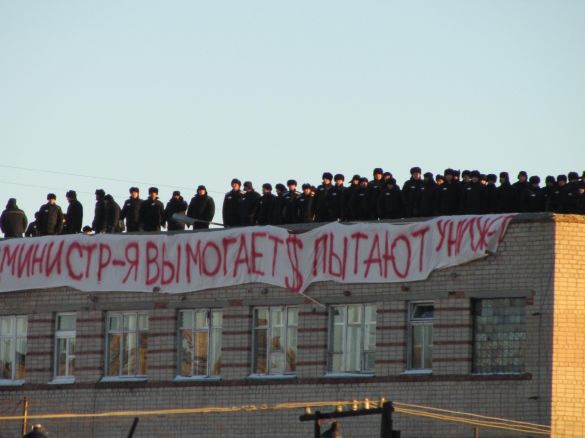 During the strike at the maximum-security prison, inmates complained about harsh conditions and demanded that fellow prisoners be freed from disciplinary cells.

There were either 250 participants or about 1,000. They demanded improved conditions or nothing at all. Their protest was plotted by criminal masterminds or it was spontaneous.

Almost nothing is clear about last weekend’s revolt at a maximum security prison in the Urals, as official statements, media reports and testimony from human rights activists vary wildly.

What is clear, however, is that the incident has attracted an unusually large amount of attention, with even state television — usually deaf to reports of widespread abuse and corruption in the nation’s prison system — devoting prime-time programming to developments at Federal Prison No. 6.

Activists say that might be because the reportedly non-violent revolt, which lasted from Saturday to Monday, was an extraordinary reaction to a familiar problem.

« There hasn’t been anything like it for a long time, » said Nadezhda Radnayeva, an expert at the In the Defense of the Rights of Prisoners Foundation. A typical revolt involves a few dozen prisoners. The rest are too afraid, have a separate agenda or come to an agreement with administrators, she said.

Hence the shock created by footage from the prison in the city of Kopeisk, which showed hundreds of prisoners standing on the roof of a building above a homemade banner reading, « Free people, help us! The administration is extorting $ [sic]. They torture and humiliate. »

During the strike at the maximum-security prison, inmates complained about harsh conditions and demanded that fellow prisoners be freed from disciplinary cells.

The incident prompted Chelyabinsk region Governor Mikhail Yurevich to acknowledge that the local penal system needed reform, and prosecutors promptly opened an investigation into prisoners’ complaints that officials were extorting money, including for visits with family.

« If this kind of event had happened several years ago, there wouldn’t have been such success, » veteran human rights defender and deputy chairman of In the Defense of the Rights of Prisoners Foundation Lev Ponomaryov said by telephone on Wednesday.

Ponomaryov speculated that high-profile criminal cases in recent months involving the punk protest band Pussy Riot and opposition activists suspected of attacking police at a May rally have led to an awakening of Russian civil society and increased attention to rights abuses.

Others, including Radnayeva, weren’t so optimistic. Russians outside a small class of politically charged urbanites were still very indifferent to the plight of Russia’s inmates, she said, and there was a pervasive belief that prisoners deserved whatever they got.

An estimated 712,500 Russians are currently behind bars, according to government estimates.

Radnayeva said the clashes between prisoners’ relatives and riot police, which resulted in 38 detentions, helped galvanize public opinion in the prisoners’ favor. 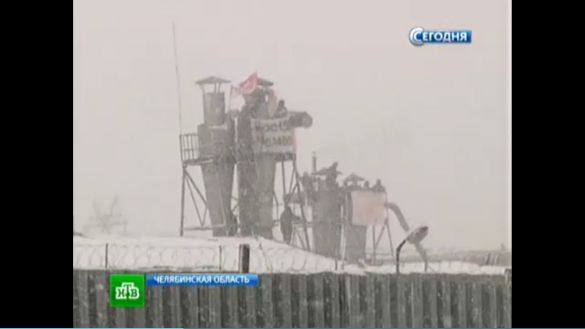 A video taken on Saturday showed prisoners standing on top of the prison with long banner that read, « Free people, help us! The administration is embezzling $ [sic]. They torture and humiliate. »

A local rights activist, part of a small group allowed inside the prison on Tuesday, said interviews with about 30 inmates confirmed allegations of abuse and extortion by prison officials.

Nikolai Shchur contested several claims made by officials. He said the revolt involved « all » prisoners, not 250; prisoners demanded media attention, not « a relaxed regime » or freedom for a comrade in solitary confinement; and the revolt was spontaneous, not planned by so-called criminal ringleaders.

« We didn’t find out anything new about this colony. … We’ve known this all for two years and don’t only know it, but we’ve also constantly talked about it and filed complaints. … We’ve received no response, » he said in a statement e-mailed to The Moscow Times.

Shchur blamed prison officials and investigators’ « clumsy moves » for escalating the crisis and said their main mistake was summoning riot police, who he said beat peaceful demonstrators.
Officials said eight riot police officers were injured when they broke up a rowdy crowd.

Also on Wednesday, a journalist and human rights activist at the Gulagu.net news site, which was instrumental in spreading word of the uprising, said she had received multiple threatening phone calls from a « prison employee. »

« Your head should be ripped off, so that you’d learn where you shouldn’t stick your nose. Got hit by riot police? You’ll get it again! » she wrote on Ekho Moskvy, quoting one of several calls that she claims were made by one anonymous caller.

Prisons No. 1 and No. 6 in Kopeisk, a city of 140,000 near Chelyabinsk in the Ural Mountains, have a notorious history of abuse, Ponomaryov wrote on Ekho Moskvy on Wednesday.

In May 2008, four prisoners at Prison No. 1 died after being savagely beaten by officers, taken to different cells and denied medical attention, he wrote. Another died of alleged maltreatment in June.

Allegations surfaced on Wednesday of prisoners buying their release on parole. A man identified as Andrei T., convicted of manslaughter and sentenced to six years in prison in 2008, said he paid 50,000 rubles ($1,600) in contributions to « prison upkeep » for his freedom, Life News reported.

But neither were confident that it would be easy to improve conditions at Prison No. 6 — or the penal system that it has increasingly come to represent.

A January 2008 protest at a prison in the Amur region in which 700 inmates slit their wrists led to criminal charges against the prisoners, and official checks failed to validate their complaints.

An initial check of Prison No. 6 failed to confirm prisoners’ claims of beatings or any other form of bodily harm, the Prosecutor General’s Office said in a statement on Monday.

« Everybody understands that lawlessness [in prisons] exists, but either they’re afraid to intervene or they’re too lazy to figure it out, » Radnayeva said, adding that 90 percent of the complaints that her organization makes to official agencies come back with a single reply: « not enough evidence. »