CAIRO: A 15-year-old boy was killed and another 60 people have been reported injured on Sunday as the main headquarters for the Muslim Brotherhood in the northern Nile Delta city of Damanhour was attacked. 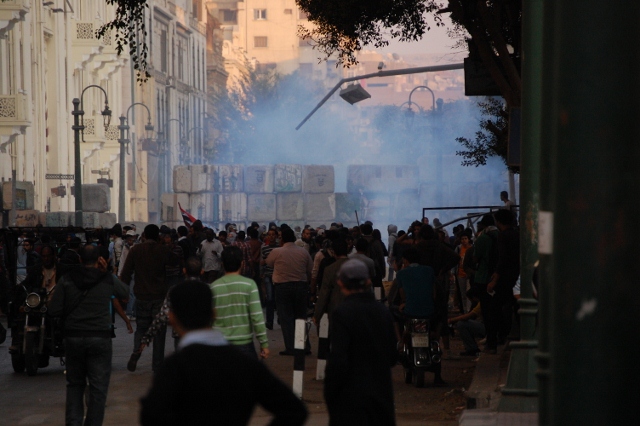 Tear gas fumes fill the air near Tahrir Square in Cairo as violent clashes have erupted in 7 governorates across the country.

The website for the Brotherhood’s political arm, the Freedom and Justice Party (FJP), claimed the young boy was a member of their group.

“Brotherhood member, Islam Fathy Masoud, 15, was killed and 60 were injured after thugs attacked the Muslim Brotherhood’s headquarters in Damanhour in the total absence of police forces,” the website said. 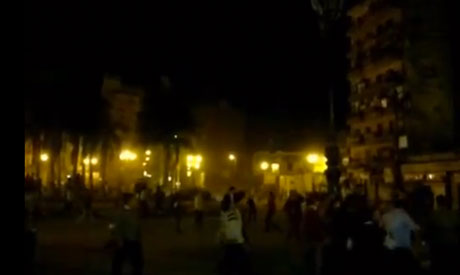 Across the Nile Delta, at least 7 governorates have reportedly broken out in clashes between the Brotherhood and protesters.

It heightens the already tense atmosphere across Egypt as police in Cairo continue to bombard activists with tear gas and rubber bullets near Tahrir Square. Many fear the rise of civil strife that could lead to pro-Brotherhood and anti-President Mohamed Morsi supporters clashing in larger numbers. (…)

CAIRO: Cairo may be getting the international headlines in the protests against Egyptian President Mohamed Morsi, other cities across Egypt are also facing clashes. 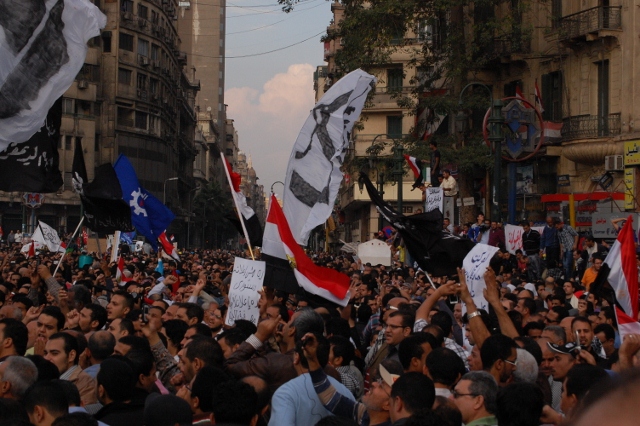 Thousands continued to flock to Tahrir Square in a strong revival of the 18 days spirit that toppled the former regime in Egypt during the January 2011 uprising.

Battles between protestors, members of the Muslim Brotherhood and security forces have been witnessed in the northern Nile Delta region of Damanhour, Mahalla, and Alexandria.

The Muslim Brotherhood’s official website, Ikhwanweb.com, had this to say regarding these events:

“Thus they went out in counter-demonstrations chanting insults and obscenities for slogans. Joining them were groups of thugs who went on the rampage, destroying and burning the headquarters of the Freedom and Justice Party (FJP) in Alexandria and in other cities. Others attacked police officers with Molotov bombs and stones, setting public and private institutions on fire.”

The Brotherhood further added that “the majority of Egyptians … support the President’s decrees.”

In Mahalla, the largest city of the Gharbeyya governorate, supporters and opponents of the president clashed in running street battles. Security forces reportedly surrounded the Muslim Brotherhood headquarters of Mahalla in a bid to defend it from protestors.

Former Member of Parliament Hamdy al-Fakharani rallied the anti-Morsi demonstration on Friday, and in the ensuing clashes was severely beaten, with pictures of his bruised face being posted on Facebook. Unconfirmed reports point the finger of blame at Muslim Brotherhood supporters, accusing them of carrying out the beatings.

Others claim that thugs with no political affiliation launched attacks on both sides, causing confusion. Bikyamasr.com could not confirm these reports.

Many protestors targeted Muslim Brotherhood offices in both Mahalla and the capital of Gharbeyya, Tanta, with other attacks reported in Beheira and Suez.

Essam El-Erian, Vice-President of the Brotherhood’s Freedom and Justice Party (FJP), blamed the attacks on “thugs,” stating that “the presence of thugs at these sites was an established fact.”

In Damanhour, the capital of the Beheira governorate, violence and street battles were more intense. Videos posted on Youtube.com show hundreds of protestors clashing in the streets, many of whom armed with seemingly identical long staves. In one video, while the two sides faced off, what appears to be fireworks are launched by one side at the other, in addition to the usual stone-throwing.

Damanhour is considered a Muslim Brotherhood stronghold, and the presence of such clashes shows clearly shows the division in Egyptian society at present.

12 people were reportedly arrested while the ministry of the interior claims that 8 policemen were injured by rocks and Molotov cocktails thrown by protestors. 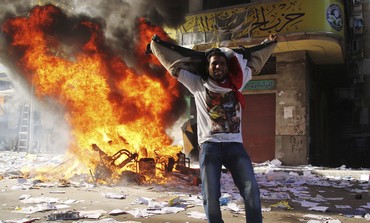 Similar scenes were seen in the city of Alexandria, with Muslim Brotherhood offices attacked in addition to the Al Qa’ed Ibrahim mosque in what el-Erian slammed as “heinous bullying thinly disguised as political activity.”

The Muslim Brotherhood has warned that “aggressors will not escape justice, and security services will account for their failures.” (…) 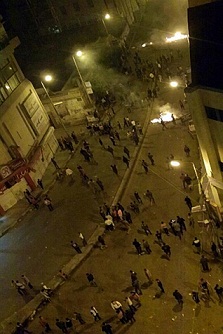 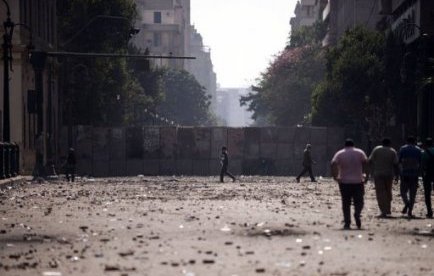