Indonesia Workers Clash With Police in Dispute at Adidas Sub-Contractor

Indonesian workers at a factory that produces Adidas footwear clashed with police in an industrial dispute on Thursday and 13 people were injured, police and a spokesman for Adidas in Germany said. 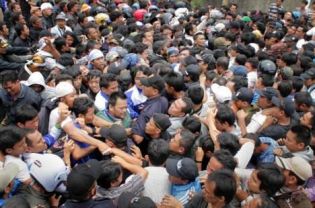 Protestors (seen at left) confront company security personnel and new employees, right, at the Panarub Dwikarya factory, outside the main gate in Tangerang, Banten on Thursday. More than 1,300 people clashed with security guards at the Indonesian shoe factory, which supplies sportswear giants Adidas and Mizuno, months after they were sacked for striking over better pay, police said on Thursday.

Some 1,800 workers at the PT Panarub Dwikarya Benoa (PDB) factory, which is a subcontractor for an Adidas supplier, were demanding severance pay and an improvement in working conditions, union leader Kokom Komalawati told Reuters.

« The demonstration today was pretty rough because the company management had prepared weapons to hit us with, » said Komalawati, chairwoman of the Independent Textile Garment and Footwear Workers Union.

Demonstrators were hit with iron bars and rocks, she said.

Indonesia has seen a rise in the number of industrial disputes in the past year as unions demand a greater share of the benefits from the boom in Southeast Asia’s biggest economy.

Unions staged a one-day national strike this month bringing hundreds of thousands onto the streets and the government said it would improve worker pay and restrict the use of temporary contracts.

Adidas has urged Panarub to re-open discussions with the union after around 900 workers were sacked for a strike over demands for back pay, a spokeswoman for Adidas told Reuters.

Adidas said it would not permit any orders to be placed with the subcontractor until the issue was resolved.

« Currently, the Adidas Group has no orders with this subcontractor, which acts as an overflow factory for our business partner, PT Panarub. We have therefore reached out to Mizuno, PDB’s main international buyer, to secure their support and involvement, » the statement said.

Under Adidas workplace standards, the factory is obliged to pay back wages from when the minimum wage was introduced in January 2012, even though PDB obtained a government waiver.

The factory is in an industrial area near Jakarta’s international airport in Banten province, western Java.