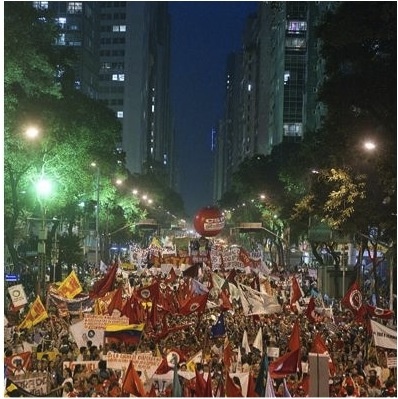 For a lot of the world, ‘Rio+20’ signifies the big environmental jamboree taking place this week in Brazil – before the Olympics and after the Queen’s Jubilee. For the thousands of negotiators and civil society observers, including ETC Group, who have tracked the process since 2010, Rio+20 ended a few short hours before the world’s ‘leaders’ touched down at Rio’s Galeão International Airport. With five staff members and more allies on the ground in Rio, ETC Group offers an overview of Rio+20, including some unexpectedly good things from an otherwise dismal summit.

But first, the undeniable bad news: it’s difficult to describe Rio+20 as anything other than a tragedy. Despite years of preparation and months of negotiations, nothing said or done in Rio can cover up not just the 20 lost years since the original 1992 Earth Summit – as seasoned delegates have quietly noted – but also the half-century of intergovernmental failures since Rachel Carson catalyzed the sequence of global environmental congresses following the publication of her book, Silent Spring, in 1962.

ETC Group’s Neth Daño notes, “Many delegations are genuinely embarrassed by the title of their outcome document, ‘The Future We Want,’ which sets sights on a future that can’t be achieved by the haplessly short-sighted initiatives proposed.”

The big winner in Rio is the industrial private sector, getting the green light to advance a ‘green economy’ with the promise of ‘enabling environments’ and public resources. After months of opposition, and under pressure from Brazil trying to cobble something out of the rubble of New York negotiations, the global South accepted an umbrella concept of ‘green economy’ with several ‘conditions,’ but the concept is still vaguely defined and open to interpretation by industry, governments and international financial institutions. For industry, the green economy clearly means the financialization of nature – the notion that every watershed and waterlily will be priced and pigeonholed (and traded and sold) as part of nature’s ‘environmental services.’

Now the better news: Feeling like the scavenger after a massacre, ETC Group has found a few remnants of hope. Despite the best efforts of Canada and the USA, for example, both the Human Right to Water and the Right to Food got a boost, and although Food Sovereignty was bypassed, the final negotiated text does recognize the importance of farmers and indigenous peoples in the saving and exchanging of seeds.

“It was only when La Via Campesina – on behalf of the world’s farmers – took the plenary podium to address the world’s political leaders that the essential role of peasants in producing food for the world while conserving the environment came to the fore. Peasants and the ways they can best be supported should have been at the very center of Rio+20 all along,” says ETC’s Silvia Ribeiro.

Frustratingly, the major initiative led by the World Resources Institute (WRI) to force greater global and regional transparency throughout multilateral environmental institutions – a move that has been gaining momentum since 1999 and has had strong Secretariat and governmental support – faded throughout the last months of negotiations and got scant attention in the final text. Which made ETC’s successful call for global to national technology assessment all the more surprising. 1992’s Agenda 21 had recommended regional and national technology assessment, but, in the year following the Earth Summit, the two UN institutions providing some tech assessment capacity were both eliminated and the US government’s own Office of Technology Assessment bit the dust a couple of years later. With the private sector in the ascendancy, few thought that Rio+20 would take on technology assessment at every level of governance and even ETC didn’t expect governments to admit – let alone express concern – that some new technologies could damage health, biodiversity and the environment.

In the negotiated outcome document (that offers almost nothing new since the original Earth Summit), ETC is encouraged that there is a global consensus against ocean fertilization, a theoretical climate change techno-fix. While a moratorium on ocean fertilization was already won at the UN Convention on Biological Diversity in 2008, reinforcement of concerns raised by this geoengineering proposal through the intensely-political Rio+20 process means that the high seas venture capitalists hoping to sell carbon credits are now ‘dead in the water.’ Last-minute moves to expand opposition to geoengineering beyond ocean fertilization to include solar radiation management techniques and other land-based techniques ran up against a tacit agreement among governments not to introduce new topics into the negotiations or to expand on existing topics. Nevertheless, intergovernmental opposition to geoengineering as a Plan B to forestall climate change is clearly on the rise.

For ETC, a third glimmer of good news is that Rio+20 has welcomed the Rome-based UN/FAO Committee on World Food Security (CFS) to consider agricultural and food issues. The CFS includes a model for the expanded participation of social movements and civil society in intergovernmental negotiations – as well as a model for bringing together both UN and non-UN intergovernmental agencies addressing common issues. When the current food crisis became apparent in 2008, peasant organizations and CSO partners called for the renewal of the CFS in Rome as preferable to UN-New York proposals to create an alternative ruling body for food and agriculture on the other side of the Atlantic. ETC Group considers it important that Rio+20 has explicitly endorsed the CFS’s work on assessment of sustainable food production and food security at the national level, as well as its work on land tenure, fisheries and forests in the context of food security.

Finally, ETC has also been actively engaged in the Peoples’ Summit for Social and Environmental Justice, two hours by bus but a world away from the official proceedings. More than 50,000 people have participated throughout the week. There, the critique of the green economy and the financialization of nature was paramount, as well as the commitment to food sovereignty, in which peasants, artisanal fishers and women play a central role. The Summit also demanded a ban on all forms of geoengineering, as part of the plan of actions for civil society and social movements.

ETC Group is an international civil society organization with consultative status to ECOSOC and many other multilateral institutions. Together with our partners in civil society, we have been monitoring the Rio+20 process and participating in global and regional preparatory meetings over the past two years.