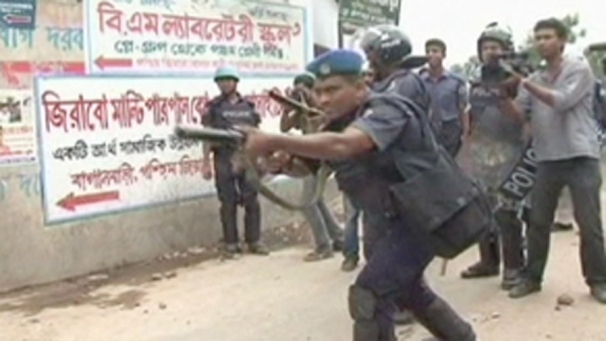 No let-up in Ashulia unrest 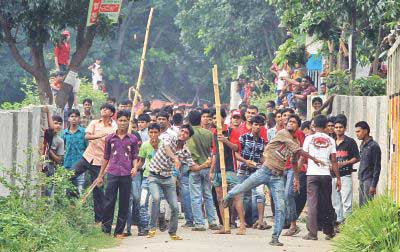 Several thousand garment workers again fought pitched battles with law enforcers in Ashulia yesterday, fuming over the shutdown of all garment factories in the industrial belt.

At least 50 people, including several police personnel, were injured in the clashes.

Agitating workers put barricades on the Dhaka-Tangail highway bringing traffic on the motorway to a halt for nearly three hours from 8:30am. They demanded that garment factory owners immediately reopen the factories in Ashulia, on the outskirts of the capital.

Leaders of different garment workers’ organisations also protested the shutdown and called upon the owners to reopen the factories immediately.

RMG factory owners on Saturday decided to shut all 350 factories in Ashulia for an indefinite period as garment workers continued to stage violent demonstrations from June 11 demanding a hike in their wages.

The entire industrial belt had witnessed a spate of violence between June 11 and June 16, as thousands of workers clashed with police leaving around 500 people injured. At least 300 vehicles were damaged and 200 factories were vandalised in six days.

Witnesses said several thousand workers took to the street at about 8:30am yesterday after they found their factories shut.

A group of youths wearing masks vandalised several vehicles on the highway. Angry workers hurled brickbats at police and clashed with them as the law enforcers tried to remove blockades from the highway.

Police cleared the highway by 11:30am after fighting pitched battles with angry workers.

Police fired around 20 rounds of rubber bullets and teargas canisters, and charged baton to disperse the agitating workers.

Police and Rab personnel stood guard at factories in the industrial belt to ward off vandalism.

Meanwhile, Bangladesh Centre for Workers Solidarity and Bangladesh Garments and Industrial Workers’ Federation in separate statements denied their involvement in the labour unrest in Ashulia and Narayanganj.

Kalpana Akter, executive director of Bangladesh Centre for Workers Solidarity, said, « A vested quarter is trying to pin the blame on us for the untoward incident that we had condemned. »

She said there was no link between the killing of labour leader Aminul Islam and the unrest in the garment sector.

Kalpana demanded that all factories are reopened immediately.

In a statement, Rafez Alam Chowdhury, president of Bangladesh Garments Accessories and Packaging Manufacturers and Exporters Association (BGAPMEA), expressed his concern over the recent events in the garments sector.

DHAKA – The owners of 300 Bangladesh garments factories shut their operations indefinitely on Saturday after days of violent pay protests by workers, threatening the country’s biggest export already impacted by the global downturn. 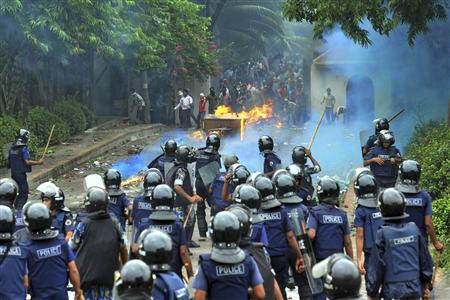 The decision to close all factories at Ashulia, one of the country’s biggest industrial zones on the outskirts Dhaka, came as talks between workers and owners had failed to break the deadlock.

« We have been compelled to close down all our factories at Ashulia, » said Mohammad Shafiul Islam, president of the Bangladesh Garment Manufacturers and Exporters Association.

« We tried to resolve the issue (of wage increases and other benefits) amicably through discussion but the efforts did not produce any results, » he told a news conference.

Witnesses said police had fired teargas and rubber bullets and used water cannons to disperse rampaging workers during five days of clashes. About 250 people including police have been injured and activists have vandalized dozens of vehicles and barricaded a vital highway. 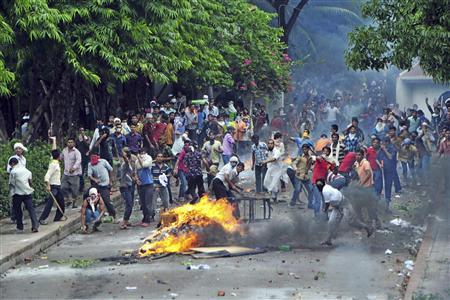 « We had to take harsh actions to restore order as the defiant workers would not stop the violence, » an Ashulia police officer said.

Workers are demanding higher pay following a rise in food and utility prices. After violent protests in 2010, Bangladesh nearly doubled the minimum wage for millions of garment workers to 3,000 taka ($37) a month.

Authorities on Saturday deployed extra police at Ashulia fearing the shut factories could be attacked and vandalized by restive workers.

Garments, which made up $18 billion of Bangladesh’s record $23 billion exports in the year to June 2011, offer a crucial lifeline to the poor South Asian country, along with remittances from expatriate workers.

Business leaders and analysts said the recent unrest would have a negative impact on exports, which fell for the third month in a row in May as the euro zone debt crisis continued to subdue the country’s economy.

DHAKA — Bangladesh garment manufacturers shut down indefinitely operations of more than 300 factories at a key industrial hub on Saturday after five days of violent protests over wages, officials said. 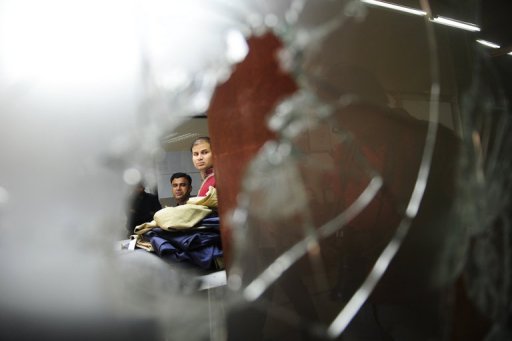 President of the Bangladesh Garment Manufacturers and Exporters Association Shafiul Islam Mohiuddin made the announcement, saying the plants would reopen only after the government ensure « enough security ».

Most of Bangladesh’s big garment factories are based at Ashulia. They employ around half a million workers who sew clothing for some of the world’s largest retailers such as Wal-Mart, Gap, Tesco, H&M and Carrefour.

« We have decided to close down more than 300 factories at Ashulia industrial area indefinitely. We can’t operate in this climate of fear and lawlessness, » Mohiuddin told AFP.

The decision follows the fifth day of protests by tens of thousands of workers who clashed with police, vandalised plants and blocked a key highway for hours, senior police officer Monowar Hossain told AFP. 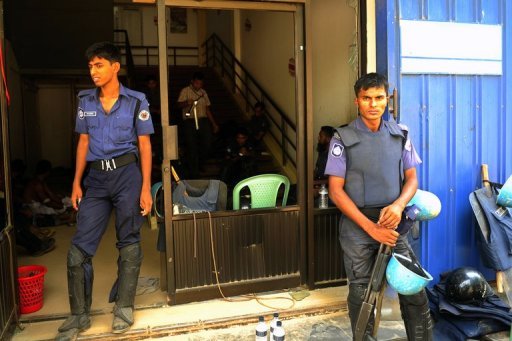 Employees — who work 10-16 hours a day, six days a week for the lowest garment sector wages in the world — were demanding a 50 percent pay hike and subsidised food to cope with the rising cost of living.

Union leader Babul Akter Thursday claimed that manufacturers at Ashulia had agreed to raise wages. Some owners also announced that they would raise the wages to help workers cope with increases in rent.

But the BGMEA, which represents all of the country’s 4,500 garment factories, denied sealing any deal with the unions.

In 2010, Bangladesh garment factories were hit by months of violent protests that forced the government and factory owners to agree to increase wages by 80 percent, or a minimum $37 per month.

The export of garments, which made $19 billion for the impoverished country last year, is the mainstay of the economy of Bangladesh, accounting for 80 percent of its total shipments.

Tensions have been brewing at Ashulia and other textile manufacturing zones in recent months following the abduction and murder of a top garment union leader in April.

Unions have accused Bangladesh’s feared security forces of killing him. US Secretary of State Hillary Clinton demanded an independent probe into the incident when she visited the country last month.