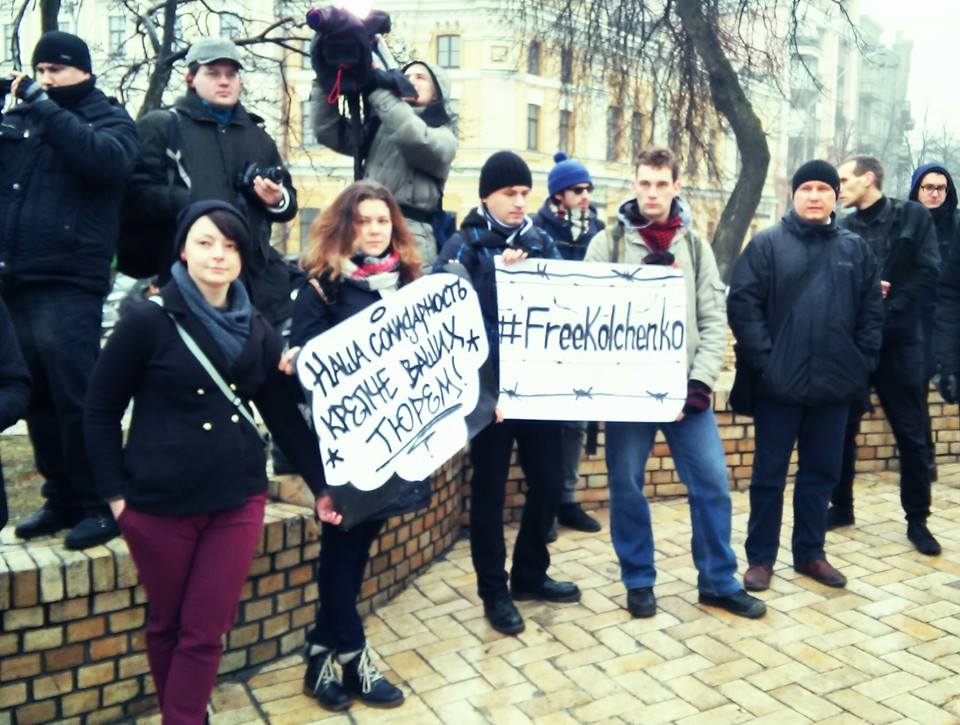 Ukrainian anti-fascists rally in commemoration of activists Baburova and Markelov shot by Neo-Nazis in Moscow, and in solidarity with Crimean antifascist Kolchenko arrested on the false charges by the Russian occupation authorities.

Sentsov, a well-known film director and opponent of Russia’s annexation of Crimea has been issued with a new charge. As well as the accusation that he organized a ‘terrorist plot’, the solo father bringing up two young children is to be tried as well under Article 222 § 3 (unlawfully obtaining, selling, possessing weapons, explosive substances and devices).

Sentsov was arrested on May 10 last year when FSB officers appeared at his home, frightened his young daughter and carried out a thorough search. He has said that the only item found was a weapon from World War II, kept as a relic. It is certainly highly suspicious that this new charge, reported by Russian human rights activist Zoya Svetova, should be laid so very late in the day.

News of the additional charges come, however, as events such as the Sundance Film Festival are highlighting Sentsov’s plight and a few days after the Parliamentary Assembly of the Council of Europe urged Russia to release the imprisoned film director. One day after PACE called on Russia to release Ukrainian MP and PACE delegate Nadiya Savchenko, the Russian Investigative Committee responded by adding a charge of ‘illegally crossing the border’.

The new charges in both cases are absurd. Savchenko was captured by Kremlin-backed militants in the Luhansk oblast and appeared in a Russian court two weeks later. She insists that she was taken across the border by force, and since Russia has consistently avoided mentioning her capture in Ukraine, it is the investigators’ credibility which must be questioned. Russia also claims that she entered the country ‘pretending to be’ a refugee, making ‘illegal crossing’ by definition impossible. In Sentsov’s case, no such dangerous items were found at the time, nor would they be even remotely probably given his family circumstances.

Sentsov was informed of the new charge in the Lefortovo prison in Moscow where he has been held since shortly after his arrest. His lawyers report that they tried without success to get through to the investigator all last week.

The period of detention for both Sentsov and civic activist Oleksandr Kolchenko has been extended to April. 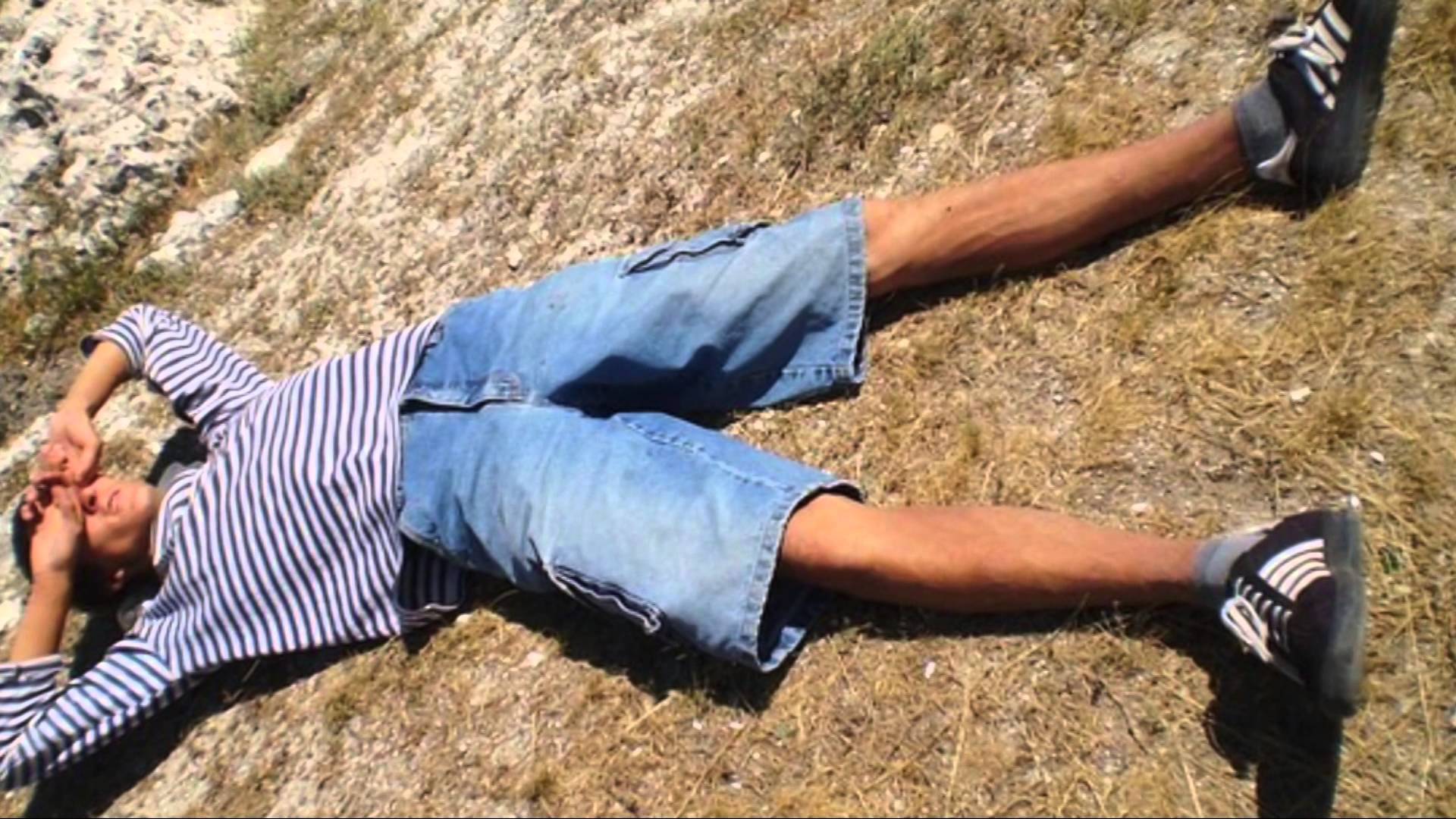 A court in Russian-occupied Crimea has denied Ukrainian Oleksandr Kolchenko the right to retain Ukrainian citizenship. The Russian federal authorities claim that Kolchenko himself officially applied for Russian citizenship, while providing no evidence of this.

By insisting that Kolchenko and Sentsov are Russian nationals, Russia can try them according to Russian legislation while denying them the rights, including access to a Ukrainian consul, to which they are entitled as Ukrainians.

Since the only ‘evidence’ against Sentsov and Kolchenko is from ‘confessions’ made by the other two defendants — Gennady Afanasyev and Oleksy Chirny — while they were held in police custody without access to lawyers or relatives, and all four are being held in Moscow, lack of consular support is a major issue.

In court Sidorkina convincingly demolished [Sidorchinka explains that the only document which Kolchenko had at the time of his arrest was the internal passport of a Ukrainian citizen. His request to see a representative of the Ukrainian embassy. This was turned down with no mention then being made of the ‘application’ the authorities are now claiming he submitted. In the first months after his arrest, the argument used was that he had breached article 5 of the ‘Agreement between the Russian Federation and the Republic of Crimea on Crimea joining the Russian Federation’. This document was signed on March 18 by Russian President Vladimir Putin and the Crimean ‘leaders’ installed at gunpoint by the Russian forces who seized government buildings on Feb 27, 2014. Needless to say, it has not been recognized by Ukraine, the United Nations and democratic countries. / Kolchenko’s supposed ‘breach’ of article 5 of this document which stated that Ukrainians wishing to retain their citizenship must formally submit an application to this effect would not be recognized as grounds for stripping him of his citizenship by any Ukrainian or international court. / The new regime gave only a month to submit such applications with a mere three offices throughout Crimea accepting them. Like most people from his circle, Kolchenko had no idea that he needed to submit any document and quite understandably assumed that since he had a Ukrainian passport, and had not expressed any wish to change this, that nothing more needed to be done. / Sidorkina’s application to the court asked for her client’s Ukrainian citizenship to be recognized. The refusal to recognize it, she demonstrated, was in breach of Russian and Ukrainian legislation, as well as international law. / Of the four possible grounds in Russian legislation for assuming Russian citizenship, only (d) could even be considered. This refers to “other circumstances envisaged by this federal law or the RF’s international agreements.” / The ‘agreement’ in question, between Russia and the government it had installed in Crimea has not been recognized by Ukraine or the international community. Nor can it be called ‘international’ since one of the signatories did not have the status of a foreign state.] all possible arguments for foisting Russian citizenship on Kolchenko, yet the court rejected her application. She plans to appeal the ruling with a higher court. If necessary, the question of citizenship will form part of applications to the European Court of Human Rights which will surely find the attempt to force Kolchenko and Sentsov to take Russian citizenship in breach of their rights.

It is likely that Russia has already understood this and is now claiming – but not demonstrating – the existence of a fictitious application from Kolchenko.

Kolchenko’s detention was also extended again this week. The ‘case’ against both him and Sentsov is still officially at investigation stage, and their lawyers have still not seen the material which the investigators will bring to the courts.

It is, unfortunately, likely that the ‘evidence’ will be from testimony given by Gennady Afanasyev whose ‘trial’ took place behind closed doors in December without defence lawyers not even informed that it was to be held and therefore deprived of the opportunity to cross-examine him. Kolchenko and Sentsov’s lawyers believe that Afanasyev made a deal with the investigators, giving false testimony against the others in exchange for the minimum sentence envisaged for ‘terrorism’.

The attempts to force citizenship on the men appear part of a general plan to minimize publicity about a highly questionable case, in which the alleged terrorist acts first announced by the FSB do not correspond with those which Afanasyev has been convicted of. There is no evidence of any plot at all, nor any terrorist acts aside from Molotov cocktails hurled at buildings of the Russian Community of the Crimea on April 14 and the local branch of the United Russia party on April 18.

Hardly the stuff that terrorist conspiracies are made of, yet Kolchenko, Sentsov (and possibly Chirny) could well face 20-year prison sentences.

There are compelling grounds for ensuring maximum publicity and preventing Russia from concealing this shameful prosecution of Ukrainians ‘guilty’ only of opposing Russia’s annexation of their native Crimea.